The first inkling I had that something untoward had happened on the that fateful day 2 years ago was when I took a call in the afternoon on my mobile phone from a journalist in Reuters in London who had once worked locally. He was looking to make contact with a councillor in Enniscorthy and I passed on the mobile number of the town council chairman. You don’t get calls like that often and I knew instantly that something was up. As I was off class for a few minutes I put on the radio and listened to South East Radio. Sadly on the hour the first reports were coming of the discovery of the bodies of the Dunne Family in Monageer.
The sheer horror of what happened in that house will never fully be known. I accept the conclusions from today’s report arising from the evidence collected and it certainly puts in the public domain the facts as can be established from the record. However I feel that the report is somewhat deficient. Its clear that there was total co-operation and in the circumstances conclusins and recommendations are easy to draw.
As a result I am surprised that sections of the report including recommendations will be blacked out. I wonder why sections are blacked out, there was no blacking

out of reports into tragedies like the Whiddy or Stardust Disaster, The Kilkenny Incest Report which Catherine McGuinness wrote was published in full when Brendan Howlin was Minister for Health. Now 15 years on from Brendan’s inquiry, recommendations on future practice are blacked out. Social mores have changed in that15 years. The sense of responsibility and community or intervention has lessened as Harney, McCreevy and Ahern presided over an Ireland where the individual was encouraged to seek the solutions for themselves with the state off their backs.

Whatever about possible libel in relation to the immediate events, why would recommendations be blacked out? Is it because there’s no money or no political will to effect change or both? What does this say about our states commitment to mental health? What we need to know is if the same situation was to happen next week what would the state services do? Telling citizens that you’ll reach again for a black marker is no answer.
Spending on the sector has dropped as a proportion of our health spending. My colleague Davy Hynes has pointed out his opposition to the downgrading of the counties psychiatric hospital at Enniscorthy. Pat Coady our Enniscorthy candidate for Wexford County Council has put the case to retain the services at St Senans especially as no improved service is to be provided in Waterford. Its not as if the county hasn’t been down this road before as 3 years ago a local woman took her 2 children into Wexford Town, called to a local hospital seeking a social worker and when advised that there was no such service available at that hospital promptly left and took her family to a nearby beach and drowned herself and her children. Last year on the anniversary of Monageer another family was found dead following a house fire in Clonroche after the husband killed his wife and then himself. 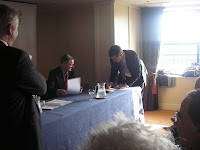 No out of hours social service is provided in Wexford for people on the edge, after these 3 tragic episodes. If that is the best that could be provided after 15 years of wealth , what can we expect from Mary Harney now? Because it is Minister Harney’s ultimate responsibility not Barry Andrews nor John Maloney. If the will isn’t there at the very top to prioritise mental health I fear that tragedies like Monageer could happen again. I hope I’m very wrong.
Posted by Unknown at 11:46 PM

I have read parts of the report with grim fascination as it is so close to the bone professionally - there but for whatever go any of us PHNs. It was such a dreadful tragedy, every day and every contact with families you wonder could it happen again and you know the answer is that you never know. This family were certainly flagged up for so much intervention yet the system seems to have failed in ways that may never be clear thanks to the blackout imposed on the final report. I cannot imagine why the recommendations were censored, it seems to fly in the face of any logic. The one thing that stood out for me was the way there is no inter-professional access to records that might lead to seeing the big picture. Lots of intervention with every discipline reporting in their own area with no sharing across disciplines can lead to this compartmentalising. I know it is so sensitive and families have to be considered but there was a sense of fatalism in the statement that it couldn't have been prevented. We'll wait and see will the recommendations be acted on, at least those we are privy to.
I agree about the other inquiry reports that were fully reported on. Openness and transparency?