Tales from the Canvass 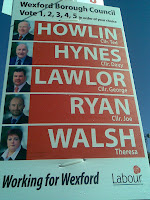 Another week over and the feedback towards Labour in Wexford has been very positive. My experience is similar to what I hear back from other parties not just here but throughout the country. Everyone on the doorstep wants to talk about the national picture. As a councillor I handled more local issue during Brendan Howlin’s 2007 General Election campaign by this stage than I’ve put through the council on my own behalf by now. The national issues are by now the key ones, anyone who says that local elections are all about local issues have missed the key shift and irony that the General Elections of ’02 &’07 may have seen local matters decide national government but now national matters will now decide local government.
We traditionally start our joint campaign at May Day weekend and this time round it was no different. There’s been a strongly positive reaction to our ticket. Its great to go to a door and have people come out to you address you by your first name and say yes they’re voting for Labour candidates. Today I met a local who’s involved in a free sheet paper. He cast a cold eye on our ticket and told me what he thought. He says feedback says we won’t win 5. I reminded him that at this stage 5 years ago his free sheet wrote me off in the contest. I recall that in 2004 at this stage of the election they produced a poll that gave me no chance and said that Ted Howlin was in trouble. The result of course was very different. I asked could they possibly print that I was in trouble this time? For some reason he changed the topic of conversation.
In Wexford the missing guest at the party is Fianna Fail, where are there candidates and their campaign? FG, Labour and SF posters are all up and their candidates out for some weeks now but just one Councillor Fergie Kehoe has his posters up which makes no mention of his running mates in the town because FF have as yet not finalised their ticket even though nominations open just for one week from today. I’ve met with Fergie canvassing and another FF candidate crossed my path the other evening but didn’t recognise me, presumably punch drunk at 7.10 after an early evening buffeting from the voters on Kennedy Park. The local media doesn’t carry one press release from the once great party just 4 weeks before polling. Fergie is a man I respect and who deserves to be elected on the back of his visibility since FF agonised as to his selection as a county councillor. The liberating thing about being a candidate however is that the decision isn’t mine, and I’m entitled to prevaricate on the doorstep, that’s if I’m at home at all! 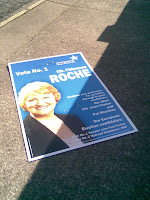 FG on the other hand has a clear wind behind it. That’s obvious as many of their posters put up on Wednesday have already suffered from the gales. Many have already remarked on how FG has embraced technology because some of their candidates look visibly younger than comparable posters from 2004! Fine Gael is guaranteed 2 seats on our council but I wouldn’t rule out a third seat at all given the national mood. 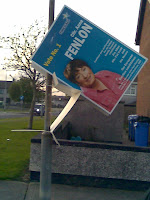 Sinn Fein have 2 candidates outgoing councillor Anthony Kelly and Ann Hogan. 5 years ago Anthony was partnered by Ard Chomhairle member David Forde. David ran a very high profile campaign and the town was covered with posters from an early stage. By comparison with ’04 SF has less to shout about now. Sadly David Forde died at an early age about 18 months after the last local elections. SF in Wexford has had their internal difficulties in the past few months and I suspect they might have been handled differently had David still been alive.
The Green Party are running Danny Forde, a relation of David who missed out by just one vote in 2004. Despite loosing by a single vote for the last seat 5 years ago the expected Green onslaught on Wexford hasn’t materialised, no sign of Minister Gormley walking the streets of the town that will headquarter his department in ’09 with Forde on his shoulder. The count in 2004 was the third last to finish nationally after successive recounts. Given the Green lethargy so far, there’s little likelihood of late nights now in the south east in 2009.

That leaves just independents. Last time around there was just 3 now there’s 7. In reality there’s less support for independents now in national opinion polls as opposed to 2004. Could more than 2 be elected? Its doubtful, Could there be a change in faces on the independent side? I don’t know. Many independents fancy themselves as riding roughshod on Fianna Fail and in some cases they’re Fianna Failer’s who’ve funked the party. An added problem for independents is that there are more looking for recognition from a diverse grooup of voters. I've always thought that while a voter may declare for an independent that there's a problem for the independent candidate in that it automatically doesn't follow that soem one who considers themselves independent and to the left will vote for a candidate who's independent and to the right. A vote for an independent may turn out to be a vote for FF.
Lets be honest about elections and being a candidate, you get involved in your own campaign, if something happens elsewhere, unless it impacts in Wexford Borough, it’s not very important. Overall one vote isn’t just important, but as I found out 5 years ago one vote counts!
Posted by Unknown at 10:29 AM