3 Long days journey into night ends but what have we learnt?. 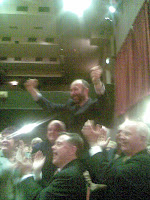 Relief at last! 3 days and over 2 hours after the polls closed the campaign is over. The long wait ended in success. I think I’m the last Labour councillor elected in the country in the local elections of 2009. Dun Mhuire Theatre in Wexford has seen many’s a drama down through the years but there’s been little in the last few days to compare with the ebb and flow of political fortune as votes for Wexford Borough Council were counted at Dun Mhuire.
On Sunday evening Davy Hynes was elected Wexford’s seventh councillor. After midnight on Tuesday morning I was elected as the 8th member. There’s 4 more to join me. The picture shows me being hoisted up by Labour supporters.
It was a biter sweet moment for me as my election was only secured off the back of transfers from my running mate Theresa Walsh who was eliminated after 2 re-counts. This took over 24 hours to establish.
Theresa had fought long and hard and I was very sorry to see her go out. She can be rightly proud of the campaign she fought and the work she did. Theresa lost a week canvassing early on due to a heavy cold. She put in a great performance in the local radio election debate. She’s a great candidate and she’ll be back. The picture of the box shows the moment when her transfers to me actually put me above the quota. 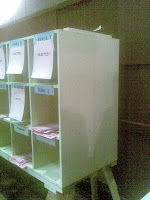 Someday, it'll be Theresa getting the votes needed to elect her.

The obligatory shoulder hoist was captured for me by my sons who I’m delighted to have at the count. Being elected to any body once is an honour and privilege. I think the officials tried their best but it’s clear that the town has outgrown the unitary ward model and that we need wards back again. There were too many candidates and too many seats. The ballot paper was so big that I saw it slide off a narrow ledge in a polling station. In those circumstances how could you see my name on a ballot paper as I was third last alphabetically and what chance had the voter to see Walsh, the last of 23 names when the ledge is so narrow?
There’s another side to the long count, the officials who’re still counting on as I type should be in work Tuesday doing the business that they normally do. Instead they’re trying to make the unworkable work. I believe that its time to return to wards within Wexford. Only Wexford, Kilkenny and Clonmel have 12 seat constituencies. The effect of our boundary extension brings extra voters, more candidates and more time wasting. Perhaps going back to the past may solve a problem for 2014? In the meantime spare a thought for the remaining 5 candidates I left beihind in the wee small hours to battle it out for the 4 remaining seats.
Posted by Unknown at 2:30 AM

Hi Councillor Ryan,
congratulations on your re-election.
This has been my first oppurtunity to vote in the Borough election, as up to recently my area has been outside the boundary.
I actually did vote for you in the election,(not No 1, as I had promised that to an old friend) but i gave you No 2. Hope it helped.
By the way, I constantly monitor your Youtube uploads. Some nice work there.
S

Hello Seamus, Many thanks for your kind words. It was a very long campaign, thanks for your vote, Believe me all votes help, when we weredoing the re-count for Theresa a No 6 would have pulled her out of the drop zone but it wasn't there.
Thanks once more and keep logging on and I'd welcome your views on any topic I raise from time to time.
Joe