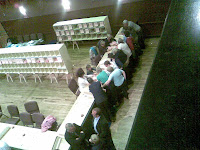 Candidates for Wexford Borough Council can look forward to at least another day of counting at Dún Mhuiré. Day 2 has just ended and we’ve elected just 7 candidates. There remains 5 more seats, one of which I’m a contender for. On Saturday I shuddered when I heard one candidate had a surplus of 1 as it brought back memories of 2004. In that election the one vote fell to my colleague Tommy Carr who won by a single vote on the Tuesday morning. Wexford Borough was the third last count to conclude in 2004 and true to form the count is progressing slowly. To be fair to the officials, they have not just to be fair but to be seen to be fair.
The Green Party has brought a barrister to scrutinise the count. He arrived Sunday morning after the Greens announced on RTE Radio that a recount was in progress in Wexford. This is because the party is anxious to be seen winning something, or at least, having something to fight for at a time when the Green Party is imploding. Deputy Leader Mary White is on hand also. The Greens may reflect a later stage as to where the party hierarchy were during the campaign as they could have raised their candidate’s profile. 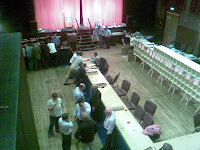 The count has reached a crucial stage. 3 candidates are involved in a tussle. DoDo Lawlor, (Ex-Labour), Danny Forde (Green Party) and Theresa Walsh (Labour) are within a few votes of one another at about 360. Whoever is the lowest will face elimination. One of the trio will benefit from the transfer and possibly be elected. At about 440 stands Fianna Fail’s Paddy Nolan. Next come 2 Fine Gael candidates and finally myself on 552 just 45 votes short of the quota. Tonight we had a re-check of the candidtes votes.
I was asked if I had any hurry out of the theatre as they’ve a booking for a play in Thursday next and I replied that they didn’t need a play because they’ve a drama running at the minute! The hall is booked until Wednesday so I’m expecting the interest in this one to run.

Check out my Youtube Channel Menapia1 for video of Town Clerk Pat Collins giving the first count
Posted by Unknown at 12:36 AM