Should this man's faith be protected by Irish law?

Some months ago when I was blogging the new blasphemy laws amid claims that a Marian image was seen in a wooden stump. I promised I’d return to the theme. Now that the laws are in force it’s appropriate to challenge exactly where the line is on blasphemy in Ireland. I do not believe that any faith is entitled to have its values protected by right under civil law in Ireland. I believe that all faiths and none are entitled to the respect from the state and its citizens, but I cannot accept that the state must defend these different faith values and traditions in its laws. If a faith takes recourse to civil law to uphold its values, it devalues its ideals.
If we need a lesson in how to objectively deal with claimed values made by some religions we should look to France. This week French courts slapped a €900K fine on the Church of Scientology but stopped short of forcing it to disband. Suspended sentences were given to some of its leaders. Why? Because the church’s operations in France have been deemed fraudulent.

In 1954 the church was established by a science fiction writer, in Los Angeles. Fundamental to the churches belief is that God descended from an extra-terrestrial existence to earth. The church was established at a time when American society feared their role in the world was under threat from foreign ideology mostly socialism. This church played on and exploited real fears. Uniquely among religions, the spirituality and the establishment of the church occurred simultaneously. The church is famously protective of their interests. The Church of Scientology has argued that unauthorized distribution of information about Scientology practices will create a risk of improper application. The Religious Training Center has prosecuted and harassed individual breakaway groups that have practiced Scientology outside the official Church without authorisation. The act of using Scientology techniques in a form different than originally described by founder L Ron Hubbard is referred to within Scientology as "squirreling", and is said by Scientologists to be a high crime. The church’s ethic in dealing with their adherents is to eliminate opponents, then eliminate people's interests in things other than Scientology. 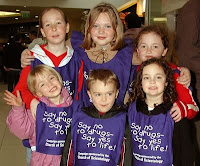 The church targets individuals with money for its course in dianetics and spent most of the 1990’s camped out on Abbey St in Dublin offering pedestrians on the street, mostly intending passengers on the 39 bus a free personality test! The scam plays on vulnerable young people and rips them off. Add in the dash of celebrity and credibility of Tom Cruise and John Travolta and hey presto you’ve a pop-faith that’s crucially never out of Hello! Strangely all members sign a legal waiver to cover their relationship with the church before taking part in their services.
This church may well be entitled to protection under Ireland’s new blasphemy law. It’s my view that the church is bogus. It flogs a nonsensical religion that cynically exploits the naivety of some young people at a vulnerable stage of their life. I understand why this religion is banned in Germany. Can the average intelligent person believe that God came to Earth as an extra-terrestrial in a spaceship? To be fair and objective to Judaism, Christianity and Islam, there are independent sources that can verify some of the events in their scriptures on which these faiths are based. But where is the independent verification for the claims of Scientology, the most unscientific of faiths? How can this be a religion and why are people not protected from its excesses?

This religion is 100% fiction but under our law it may well be protected. The law says Blasphemous matter is defined as matter “that is grossly abusive or insulting in relation to matters held sacred by any religion, thereby causing outrage among a substantial number of the adherents of that religion; and he or she intends, by the publication of the matter concerned, to cause such outrage.
Is it an outrage to out a religion for what it is, a sham faith that cynically exploits the vulnerable and damages them? But what is a religion and how does the state define it? Were I to set up a religion in the morning would it be protected by the law of the land against question simply because it would outrage member of the “faith”? If the state feels an obligation to protect institutions against the citizen how can a counterbalancing protection be out in place to protect the citizen against the institution?
Posted by Unknown at 1:15 AM

Scientology is a dangerous, exploitative cult and needs to be investigated by the highest authority.

Technical tip (I have a Higher National Diploma in Electronic Engineering (from W.I.T of course)).

Your blog is too big. It is slow to load and I am in the same town as you and have pretty fast broadband,

Furthermore Joe, Blog of Blogs is based in WEXFORD and is at least as old as your Blog.

Furthermore Joe, I had a political blog based in Taghmon as far back as 2005>

HERE IS A LINK TO IT"

So Joe, why is your top heavy pro-government blog Wexford's FIRST political blog?


I used to always vote Labor until this fucking Lisbon 2. I feel betrayed and have since joined a Real Socailist Party