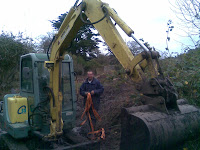 If a week is a long time in politics what does that make 2 months? Who says that all the news is negative and that there is little to be positive about. Here’s something that will offer an opportunity to those who like getting their hands dirty. The 2 pictures taken at the new allotment in Wexford couldn’t show better the contrast between mid-August and late October. 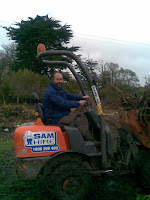 About 6 months ago I put down a motion to Wexford Borough Council asking that the council would identify possible sites where an allotment could be established for the town. Immediately I was contacted by Jane Clooney and Tom Harpur, both interested in gardening and enthusiastic to encourage others to grow their own. 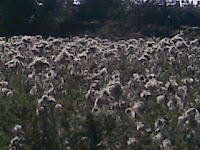 Jane explained their interest in developing an accessible allotment for Wexford Town. The pair acted as a touchstone who drove the project rapidly forward. They developed the contacts and secured a site by the end of August. The picture showing the dandelions was taken in August. Clearance progressed at speed, revealing paths, green houses and identifying old varieties of fruit tree, which are being retained. The latest pictures showing myself in the driving seat of the dumper truck were taken at the week end. Much of the briar and overgrowth has been removed and the soil is nearly ready for ploughing. Once ploughed, the allotment will be advertised and plots of 100 Sq M will be available for cultivation. Water and the possibility of restoring a green house are next on the hit list. 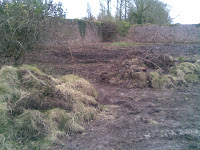 It is proposed to open the allotment in early 2010. The allotment will offer very good value for those who’re concerned at food miles, the quality of vegetables sold in the shops and of course offers exercise and good healthy fresh air. Our own garden is limited in size and I’m looking forward to planting spuds in the allotments and growing a few peas or beans next year.
However the allotment has also has huge potential within the community. It will bring together people with an interest in horticulture. It has the potential to provide a resource that has a use in further education as well as reducing marginalistion and isolation. Good news stories don’t grow on trees these days they must be cultivated!
Posted by Unknown at 11:33 PM

If I wanted to get to Waterford by train for mid-morning, when would I have to leave Wexford?

Lisbon Treaty - Best out of three?

Only seems fair to me.