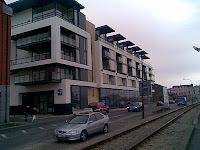 Last March a local paper decided that it was time to print the expenses of each member of Wexford Borough Council, or to quote the article say what we cost the tax payer in 2008. Minister John Gormley lately decided to limit the expenses for councillors from Borough Councils to €3,000 as he believes that there is an industry in conferences that councillors are abusing. The limit he set is about is double what we budgeted for however there are no plans from the Wexford Borough Labour Party councillors to seek to have our allowance increased to the national limit.
I’m not abusing any allowance and unlike the minister I’m happy to publish openly my own expenses. I’m not feather bedding my political buddies in public office as John Gormley is. I take exception to the Minister’s suggestion that I’m living the high life. So unlike the Minister I’m publishing my expenses for both 2008 & 2009.

Let me explain how I’m paid by you. I’ve rounded off slightly to the nearest tenner rather than publish the exact sum. Every council has a representational payment which is linked to the salary of a Senator. In 2008 it was €8,800. This is taxed at 40%, a pension levy is deducted (for which I won’t get a pension) and I get net about €5,200 approx per year. Add to that an allowance for expenses incurred in dealing with meetings; communications etc which is roughly €3,300 and you get the basic income of a borough councillor which for me is €8,500 in 2009.
I attended one conference in ’09 and that was a North South conference in Castlebelingham,Co Louth. It involved 1 overnight and I received €377 for travel, accommodation and subsistence. The keynote speakers were our own Liz McManus who spoke about the challenge facing local councils on the environmental front, FG’s Shane McEntee who spoke on the need to harmonise road safety on an all island basis and Jeffrey Donaldson MP. I raised with Jeffrey the re-organisation of councils in the north and how following the re-structuring they plan to reduce councils. My question was highly relevant because the McCarthy report plans to abolish local authorities in the south.
I’d no other claim in 2009 from Wexford Borough Council, I note I received about €80 from Co Wexford VEC in relation to all the VEC meetings I attended. The VEC do not pay unless the time between leaving your home until you return is 3 or more hours. As I live 4 Km from HQ that’s unlikely and there’s no mileage paid for living close to VEC HQ. Moreover there’s a stay on VEC payments of 2 months. I’m not complaining about a 2 month stay, a student waiting for a grant has a greater need of payment than a VEC member.
In total the amount received in 2009 is about €8,600. In 2008 I received about €11,100 after tax from Wexford Borough Council and another 400 from the VEC. That includes an allowance of €500 for serving as Deputy Mayor. Included in the claim was a claim for phone calls in relation to local authority business that goes back to 2007. Later this year I’ll lodge my claim for calls from 2008/09.
I attended 5 conferences that year, 1 for Local Authority Members that was opened by the minister who condemned the conference industry! Another organised by him to explain his white paper on local government in Waterford, one on anti-social behaviour in Carrick On Suir and another on planning in Skibbereen. The final conference was of the AMAI in Trim. In total I spent 3 nights away in 2008. I think it’s a bit rich now that John Gormley will now attack councillors for attending conferences when he’s either opening or organising them! But then the greens are well able to play both sides of the argument and still manage to loose each way! Next year I’ll publish again for 2010.
Posted by Unknown at 9:15 PM