If Tories and Unionist can re-unite what now separates FF & FG?

The recent emergence of a Pan Unionist front in British politics between the British Tory party, the Ulster Unionist and the DUP may well see a united right wing challenge to Gordon Browne emerge in the forthcoming UK General Election. As to how that may well impact on politics on the whole island it may well be a case of let’s wait and see.
However the logic of rationalisation on the centre right in UK politics is rationalistion on the centre right in Irish politics. It certainly poses the question that if the DUP can reconcile with the Unionist Party after the vicious deep and personal venom of the past 40 years directed against anyone on the unionist side who wavered in their sectarianism, what policy differences now divides Fine Gael from Fianna Fail? 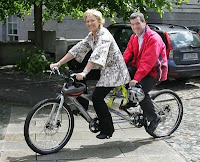 FF & FG’s differences go back slightly longer than those between the DUP and UUP but never plumped the bitter depths that marked politics up north, well at least not in my life time, early 80’s aside. I don’t think that Enda Kenny would in a month of Sundays contemplate rapprochement with the old enemy however soon we pass a significant lanmark. Next Tuesday marks the date over the last 25 years when the Green Party’s tenure in office exceeds that of Fine Gael. Polls show an increase in FF support that is greater than the margin of error, some of it at FG’s expense. Fianna Fail and the greens both know that they have time on their hands and polls like the recent Sunday Business Post one show that support may well swing back to them and that the opposition may weaken, despite what we know about the impact of the recent budget. This poses questions for both Fine Gael and Labour.
Enda Kenny’s poor performance on the Late Late Show may account for the drop in Fine Gael support. I can’t understand how within 5 minutes an audience that cheered Kenny could jeer him at the end of the interview, but it happened at a time when the Government had made a hames of dealing with bad weather. If Fine Gael continue to lose support and they decide to jettison Kenny as happened 10 years with Bruton, the shoo in that has been forecast for them at the next General Election may not be the formality that it is being represented. 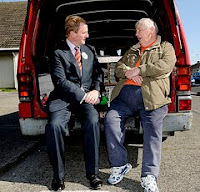 And where does all this leave Labour? In 2007 we got just 10%, last year we were up to 14% and now we’re on 17%. Steady progress under Eamon and Joan. If you’d told me that we could get 17% in a national poll, I’d be thrilled but would 17% in a General Election see us in government? Unlikely given today’s poll. Is it a case that Labour is too small to be the engine of government but too big to be of use to Fianna Fail? If Fianna Fail were to recover and fall just short of power in 2012 would they bother with the Labour Party because there would be plenty of political patsy’s like the greens happy to roll over? Would they be better off forming a grand coalition with FG where there would be little disagreement on the need to cut salaried of public servants, keeping low tax etc.

While Labour has a clear identity that would stand to us in any eventuality, what about Fine Gael? Would Richard Bruton be happy to see out his days in politics not having an input in government while a possible FF government rehabilitate Beverly Flynn or Michael Lowry in power? What makes Fine Gael different in policy terms from Fianna Fail? After 80 years not a huge amount. I’m prompted to say this because when I hear Leo Varadkar complaining about single people subsidising married stay at home wives I wonder have some people in Fine Gael more in common with the Fianna Fail member of Wexford VEC who this week called for league tables within the VEC! To be fair FG members of the VEC clearly dissociated themselves with the FF member. However my problem is that I share little in common with Leo Varadkar’s analysis of society and in the post Enda Kenny era he’ll play a key role in the direction FG take.
Could Fianna Fail rally and would they form a coalition with a Fine Gael party that under achives at the next General Election set against a back ground of wider political fractionating where Labour on a respectable level of support was the main opposition party? The lure of power is there for an FG generation that has recovered from the 2002 debacle but has yet to get their hands on the levers of power. Recently a FG handler was mauled for suggesting a possible SF coalition. The reality of the mathematics of stable government makes all coalitions possible. I think the unthinkable scenario may soon get more attractive for FG as the difficulty of getting into office to deliver policy, one that FF will roll out with any takers at the drop of a hat so as to thwart FG finally sinks in.
Posted by Unknown at 1:17 AM

I would love to see an FF FG coalition next time round, it can only discredit the right and strengthen the left.

I really think it's time Labor started thinking long term and not keep jumping into office with the first centre right party that offers a few juicy cabinet portfolios.

I prefer to argue policy over personality. There are many people in Fine Gael who would not share the views of people like Leo Varadkar but clearly there would be many who do. My point is that in the future given Fianna Fail's abandonment of PAYE workers and the obvious attractions for some FG suporters in their new approach I think that in the absence of Enda Kenny FG could move closer to FF than they are to Labour now. While I would welcome the end of civil war politics such a government would be no friend of the majority of working people and unemployed in Ireland. In the context of a 3 way split which Eamon visualises the reality is that any one of the 3 could end up in government as the ideological engine but the corollary is that 1 or possibly 2 of the 3 won't. I'm happy to open up a debate of what then for Labour.

There is a lack of unity on the left. I understand where your coming from however 20 years ago I remember people sayng if only Labour, The Workers Party & Jim Kemmy could unite and they did. Still the left fractionates. Personally I feel there is a key differnce in terms of analysis between Labour, SF & PBP/SWP and a differnce in solutions.
Lets avoid the inevitable slagging that goes on on the left and suggest could Labour SF &PBP agree an analysis and solution for banking, re-construcitng the economy, rebuilding the social infrastructure of our country and how to finance that? Certainly I would have a lot of common aspirations wiht others on the left but where FF & Fg have succeeded in the last 90 years is having the political unity about a common purpose. Does that exist on the left?
In any other country given the events of the last 2 years the left would be in the driving seat, here Labour is about 8% better than its 2007 GE performance and the others are flat lining. Does this say something about the left and does it say even more about the Irish people and FF?