Slump Coalition’s greatest myths; Part 1; “We all benefited from the boom”

The above sound byte is frequently used in the media by neo-liberal economists, bankers, builders, property developers, FF and their Green and independent patsies. This statement is never challenged.
A small number of property developers amassed enormous land banks for the purposes of development. To aid them the FF & PD government incentivised building. The construction sector needed domestic customers for housing so mortgage lending criteria were relaxed, second homes and buy to let schemes
incentivised. Profiteering saw the average price of a house climb under Ahern & Harney between 1994 and 2007 from €73k to over 320K! During the same time inflation in the building sector suggested the average house price should be just €132k. The difference between the 2 is accounted for by profiteering. To keep up with rising prices, the value of mortgages rocketed and while wages grew they couldn’t keep pace with profiteering in the building industry do it became more difficult for ordinary people to get their foot on the property ladder.

A hysteria resulted where even reality TV programmes got in on the act to find properties for first time buyers, in one case a government TD acted as a judge and newspaper property supplements bulged with seductive ads for new developments.

So let’s not confuse higher pay with any putative direct benefits from the boom, unless you think that it’s somehow a privilege to own your own home! Many of the houses built in the boom were distant from where people worked and involved a long commute usually by car, expensive child-care and when the child goes to school above average pupil teacher ratio. 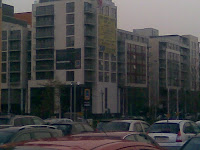 When Bertie Ahern proposed to increase his salary by €38K per annum he ignored the reality that for 1.5M in the state €38K was their total household income! Many in the workforce have little or no pension provision for their retirement. At the same time total tax reliefs in the state were valued at 25% of the total tax take! The top 1% when you leave out residential property own 34% of Irelands wealth. During the Ahern period when a wealthy person could find tax shelters to invest in (private hospitals, hotels, 3rd level facilities, nursing homes, holiday camps, student apartments, park and ride facilities, car parks, and refurbished flats), childhood poverty rates were at 7.5%, just 21k social houses built, pupil teacher ratios were among the highest in Europe, hospital waiting lists grew, marginalisation grew as Michael McDowell said he believed in inequality as a motivator in society.
At the same time state assets such as Telecom Eireann, Aer Lingus were flogged off to the market, cash reserves depleted to an extent that investment in broadband significantly lags most EU countries. In the case of the electricity market, prices were driven upwards so as to make the industry more profitable for new entrants. This policy is being encouraged by the greens to an extent that price of power is now a key expense in SME’s. 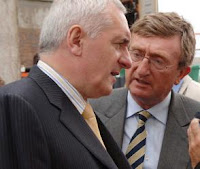 Consumption replaced production in our economy. Ireland has now nothing to sell on an international market other than low tax to attract company accounts to the IFSC. Unemployment is now set to hit a record 500K this year, 4 businesses are going bust a day, tax take has slumped, social welfare and spending cuts are a reality. The party is over. Like any party the guests are gone leaving the clear up to the hosts.
Posted by Unknown at 9:01 AM