Snow Joke in Wexford when Gormley's grit hits the fan! 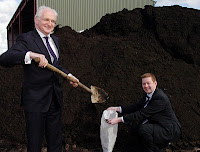 It’s early January and the government are out of bed! When they pulled back the curtains they found what the rest of us knew for 2 weeks. Wexford Town is treacherous with snow and ice. Wexford is no different to many other parts of the country. The N11 was particularly hazardous with the Gorey by-pass being especially bad. I wouldn’t attempt to drive a long distance in Ireland on the national primary routes that the Environment Minister claims are open. On Wednesday I spoke to Joe Duffy on RTE’s “Liveline” in response to concerns that Irish Ferries cancelled sailings when Wales had good weather because it was snowing heavily in Wexford. 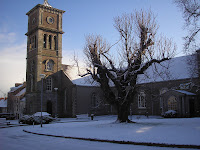 Last Sunday with with a number of councillors, I spoke with the Director of Services for Roads and he explained that rock salt was more effective than anything else but that it was fast running out. To be fair to the officials (I hope I’m not accused of having been domesticated by officials), they cannot spread grit that they are not responsible for ordering. Rock salt supplies are ordered by the NRA and the provision is put out to tender because of the value. Moreover the council has let go workers because of the reductions in allocations by central government. The point I’ve made to people who’ve raised it with me is that I cannot spend what I’m not given to pay someone who isn’t there to spread what isn’t bought! And to be fair people are beginning to understand that. I did make the point to officials that sand should be used but they replied that sand blocks drainage pipes and gullies and will eventually lead to flooding. I understand where they’re coming from and that they have been put in this position by the government, however they can’t make the political points that I can 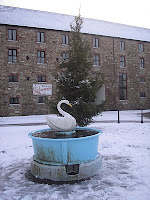 The Minister for Transport is said to be on holidays on the beach in Malta while the Minister for Environment (who says he’s not the Minister for Snow) told RTE News tonight that he didn’t know the minister’s whereabouts. There’s one thing John Gormley is sure of and that’s that he’s passing the buck to local authorities because they are responsible for the gritting roads, just as he passed the buck to local authorities for all the flooding by blaming flooding on rezoning. I’m fed up of last November’s floods being described as a one in a hundred year event or the snow as a one in a thirty year event. Minister Gormley is bang out of order when he said that Local Authorities have enough money, we don’t. We had a cut in both 2009 budgets and another in 2010. Our estimates reflect that and allocations are made arising from what we can raise. The minister needs to stop hiding behind clichéd figures plucked out of the cold air. 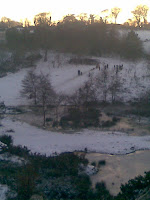 In 1982 the late Michael O’Leary (who was slaughtered at the time for his response) was in charge as Garret Fitzgerald was on an holidays when snow fell. He acted to convene an emergency cabinet meeting, if a minister couldn’t make it then he got Health Boards, Garda Commissioners, Army Chief of Staff and RTE, Emergency services and anyone who could affect change. Soldiers were put out on the Curragh to protect abandoned cars, Irish Rail ran a train to bring milk to Dublin, Radio stayed on air 24 hours broadcasting information. My point is that every state body played a role. At least to O'Leary's credit he tried to do something. Now when a similar emergency is even longer all we get is finger pointing at the local authorities. Why? Because FF don’t control them.
Calling out the army will make little impact in Wexford. We have 2 full time soldiers and 20 RDF members in the town. Indeed RDF numbers are being run down in line with budget cuts. The RDF will not be mobilised, Wexford’s needs will still go unmet. The “problem” is merely now seen as one of keeping roads free and then everything else will fall into place. Many of our major roads are tolled and constructed by PPP. When the projects finished and opened early they were held up as examples of how things should be done. Should the PPP companies now be charged as the state has to step in to maintain them? I think there’s a case for levying these companies now. 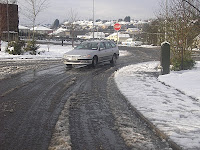 There are a wider number of needs, isolation in particular among the elderly, medical as the injured make their way to A&E as well as leaks that can mean no water or sewage or increased cost in water treatment. Social welfare payments didn’t arrive at some post offices while there now exists a clear need to pay now the fuel allowance so that those on limited means can kept their homes warm.
My own party spokesman on Education Ruairi Quinn’s suggested that schools make up days that are lost. I’m not so sure how this would work. I’m also not so sure as to who would do the work. Where caretakers or secretaries were in working during the snow, would these be expected to show up on the extra day and would they be paid extra? When would the days be worked? In the event of a teacher who may have been on maternity leave on the “snow day” and had returned before the snow day was worked, would she have to work a day that she never had off? I don’t believe that the Department of Education will go there given the wider reality of frayed industrial relations in the state. 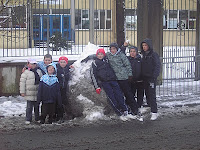 It should provide an opportunity for neighbours and communities to pull together rather than for Minister Gormley to pull the other one! We’ll make it through despite the government. There exists the possibility of more snow before the week-end is over, Lets hope we cope better. At least Minister Dempsey, who gave us the e-voting machines won't have to worry about a cold front where he is!
Posted by Unknown at 11:36 PM

All you guys seem to do. Maybe if you could come up with a few positive solutions people might see some reason to give you a shot at government.

I lived in Germany for three years, and I saw real winter weather. People get on with it and act like grown ups, not blabber about getting the army out and give out about the government.

I cleaned the footpath outside my house this morning, as did the dear old lady two doors done. NONE of the other people one my street did, or the rich c***s in that bloody theater.

Later in the day two people said to me, (put on a lazy Wexford accent when reading this) "sure if you clean your footpath and someone slips on it you could get sued." So f****** sue me, I'm not having some elderly person break their neck on my doorstep.

I checked with the corporation to see if this was true. Of course it is not. People want to be nannied.

Why oh why can't people enjoy a bit of lovely weather,

Would providing a well rsourced local authority be one reason to be in government? In Germany local authorites provide what's needed because you pay a local tax to the local authority. Here we aren't given the resources.
You're quite right about clearing outside your own door. I've done it 3 times already after each snow shower and gritted with ash from the fire place, better than nothing.
Sorry to think that I come across moaning! I thought the pics might give a positive image of Wexford in the snow, it really looks well. I was contacted by a national paper to ask me ws it true that kids threw snowballs at a funeral in Wexford and I had to tell the journo I didn't know any one had died this week in town!!

I totally believe in strong well funded local govt, but the sad truth is all the major parties at national level don't.

I talk to many local reps because I love my town and believe it should be run in an intelligent way.

I really could not be bothered talking to any of our TDs. Sean Connick maybe, but the rest, as far as I can see (in fairness I never met the two FG guys) are in it for the money and the glory.

They get mesmerized by the bright lights of Dublin and forget about the people they are supposed to represent.

Sorry for giving out but I am sick of people moaning about a little bit of snow, imagine being in a tent in a refugee camp in the mountains of Pakistan. You might have reason to moan then.

As a dub I doubt if the bright lights are all therre cracked up to be! to be fair to Brendan Howlin, I don't think the bright lights mesmirise him too much! Over30 years he's represented Co Wexford better than any other TD and doesn't see himself as being lobby fodder for neo liberal economics. Any time there has been a question mark over Wexford Hospital Brendan has always been there. I wonder would other TD's be as protective or as supportive?

I voted for Brendan Howlin for years (ever since Michael Enright died), up until the last election. He seemed to be getting a bit cozy with FF. Which proved to be the case.

Since then I've hardened my position and would not vote for any party that is willing to coalesce with FF or FG.

In fact in the absence of such a candidate I think I would be compelled to vote FF, as the most realistic left wing option. (I know this sounds crazy but I don't trust FG).

Last time out I was forced into voting SF, hopefully next election the People Before Profit Alliance with field a candidate.

Its a long way off to the next General Election. At that election the county will have 3 clear options, FF, FG and Labour. Given what is happening now there is huge flux between parties. Labour will put itself forward to seek votes to maximise the number of radical and left wing TD's.

Depending on the way numbers stack up, and who would have thought that FF would have abandoned public sector workers for the private sector? I hope in that contxt that PBPA would support Labour in a campaign to protect communities and services.