Lee’ leeward move to have his cake and eat it!

I’ll resist the urge to kick both FG & George Lee when they’re down but George Lee’s decision to walk away from politics does damage to FG, Enda Kenny but most of all himself. The person who comes best out of the debacle is Alex White who is above the internal scrap within Fine Gael and I think he will win the by-election on his record of hard work as well as his solid performance in the Seanad. Ifeel sorry for Alex White having ran a good campaign based on policy and not celebrity and profile. Lee will probably be compensated with the role of RTE’s Washington correspondent swapping places with Charlie Bird.

While White and Lee share a common background in RTE White’s record as a political activism goes back 30 years when he served as Vice President of TCD Students Union to one Joe Duffy. If Lee’s volte face says something about the body politic it also says something more substantial about the Irish media.
Broadcast media have in recent years abandoned the need to question in favour of talking heads. As a result a small coterie of hand picked individuals are frequently wheeled out to tell us as fact what they believe to be true. Many of these individuals will have connections to Fianna Fail and are more effective at spinning government views than ministers themselves as these people are not deemed as being biased. It seems to be the small number of same talking heads spinning opinion as fact everytime.
The recent budget was analysed by the Finance Minister’s cousin along with another whose father was a close side kick of CJ Haughey. Lee was part of this set who were perceived to have an inner wisdom that the rest of us could only imagine. Ironically immediately after Lee’s resignation RTE’s first impulse was to wheel out a “Political Correspondent” whose wife also happens to be a ministerial adviser! Needles to say no one asked Alex White how he felt after spending 3 weeks as well as plenty of party money running against the Lee juggernaut that spent mornings waving to commuters from roundabouts. 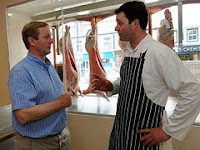 So what does this tell us about the new generation of opinion forming journalists? The perception is get your degree and get into RTE. The old days of building up a perspective and an analysis from dealing with issues like local authorities, schools, pot holes etc. the sort of thing that concerns ordinary people seems to be missing from the sort of panel that Mary Wilson wheels out every Friday. I often wonder do these journalists and columnists ever meet ordinary people other than their own set? To be fair to Lee he did the state some service on the NIB scandal. But how many other journalists from the Doheny & Nesbiths School of economics have actually done anything other than give us an opinion?
In fact Lee’s failure to make an impact will be used as a stick to beat politics with. In that case we all lose, regardless of party. The triumph of celebrity and instant opinion over politics will be the end point of the present trend towards opinion journalism. My point however is that in a political system should a party not run someone with a political record rather than the next best thing since sliced bread? Tell me what you’ve done about what you think rather than what merely what you think should be the maxim.
While I hope that politics and political parties learn something from the George Lee debacle would it be expecting too much to think that journalism would draw a few conclusions too?
Posted by Unknown at 4:57 PM

Ha, ha, ha, I think this is so funny. FG deserve it, Lee deserves it. The only thing that bothers me is that Lee can stroll back into RTE as if nothing has happened.

Were he a private sector worker who gave up his job for the same reason he would probably be signing on, or more likely toughing it out in the Dail and serving his apprenticeship like everyone else has to.

Now we have to listen to him giving his unbiased opinion on RTE knowing exactly how right wing he is.

That said I stopped watching RTE television over a year ago because the right wing bias was driving me insane. If only I could resist turning Kenny or Mary Wilson on I might be living in blissful ignorance.