One Ireland One Day 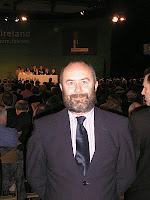 Where does time go? I can’t believe that it’s the time of year for national conference. But its here again so this morning it was into the car and off we went. I was delighted to meet up with some of my sidekicks; Keith Martin from Westport who spoke on the debate on the economy There really is nothing up for grabs at this conference, but the contrast with the last Galway Conference couldn’t be starker.
The last conference I was at in Galway was my first. Lets not go there in terms of 1982. Needless to say the parallels are merely geographical, a lot has changed since. There is a clear desire to see that Labour ends up in office after the next General Election. The strong message is one of driving the agenda of the next government. There was a clear sense of purpose in Gilmore’s speech. He seems to emphasise “when Labour is in government” As opposed to the last Galway conference when the party leader had his own difficulties, Eamon Gilmore is a completely different kettle of fish. Is it the time that’s in it and is that ordinary Labour members have been beaten around too much by FF since 1997 and at last the penny has dropped that the only way back is up. 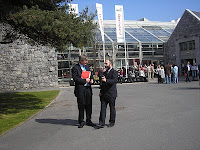 A Labour led government means that Labour will be in the driving seat. Back in 94-97 nobody could deny that the agenda was pure Labour and ironically it was Fine Gael that benefited from the subsequent General Election not Labour.
On a personal level there was strong support for me from delegates on the railway issue. In 1082 I remember Cllr Patricia McCarthy who was our candidate in Clare giving a string speech on rail closures. And here we were again talking about line closures at the Transport sub-committee. An interesting contribution on GLUAS and the Dargan project. I wish the WRC the very best to of luck.

What really stood out tonight was Margaret Ritchie or perhaps as she’ll be known soon Margaret Ritchie MP. As a woman leading in northern politics is hard but she’s sharp and to the point. I think she’s in the Gerry Fitt mould and lays a value on the Labour connection. To me that’s important. Name checking our North Kerry candidate will do her no harm either in my book!
Posted by Unknown at 1:10 AM

Joe - great work on the Rosslare to Waterford railway line. Are you going to highlight the strategic significance of the line in light of the lockdown of air services ? No doubt Irish Rail will desperately attempt to run any additional services for the boats on the line despite unprecedented demand, although they have been forced to do so on the Rosslare- Dublin line. Surely now only the most foolish would continue to press for closure.