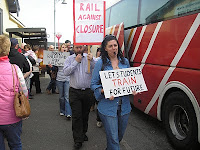 I was asked what I was doing by a councillor today outside O’Hanrahan Railway station in Wexford today as I stood with a placard on my shoulder. I explained that I was taking my placard for a walk! It was a beautiful Spring day in the south east, typically sunny.
So as we set off picketing we got support, waves and beeps of horns from well-wishers. The mood of the protest was humorous as we blew our train whistle and chanted, Rail against Closure! Save Our Train! 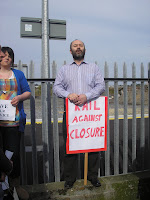 When the train came in we went to the side wall and blew and cheered until it was ready to depart. Then we stopped blowing as the guard waved his green flag and off they went. Over 30 people attended and that was good for a start. Next Tuesday we’re off to Bridgetown to protest as the evening train arrives.

I joked to a woman that with school restarting a good project for a few students in woodwork would be a coffin painted in the IE corporate colours for when we eventually take our protest to Waterford! Or maybe it wasn’t a joke?
Posted by Unknown at 5:46 PM