Senator Dan and the Battle of Wellington Bridge! 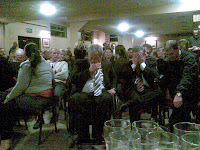 You know in Irish politics when you’re making headway, it’s when Green Party Senator Dan Boyle tweets. And so it was last night as the good people of Co Wexford gathered in Wellington Bridge to discuss what has been a dramatic 24 hours that our plight was tweeted by the Deputy Leader of the Seanad.
In reality we need more than a tweet to get us out of this mess and to be fair the people of Wexford came up with plenty of questions for Irish Rail management last night and got precious few answers from a poorly prepared Iarnrod Eireann team. Many of the questions that were raised from the floor were not answered and that’s just the ones from the deputies. Of the seven I put just one was partly answered. Closure is imminent, the company will apply to the NTA for permission to end service. The head picture was taken as the Irish Rail representative was speaking and you can gauge the response of the 3 politicians to his attempted answers.

The contract between the NTA and the company was only signed 4 months ago. It makes no mention that the contract allows for termination of service merely change of service. I pointed out to the company that the NTA will receive objections from local authorities in the run in to their decision. I’ve already a motion down on the matter for Monday nights meeting of Wexford Borough Council and if its passed as would be likely, they will have one objection by Tuesday.
The NTA approach is an attempt to by-pass a government decision on the matter as it would mean rowing back on policy initiated by Seamus Brennan in 2001 that there would be no more line closures. So effectively there would be a de facto policy of closure through the back door while the official policy of no contraction of the passenger network still is in place. An Irish Rail solution to an Irish Rail problem! 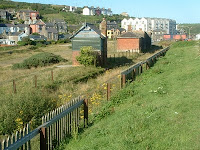 Last night saw a wonderful turn out despite the Irish Rail dirty tricks. Let me explain what the company did. At 3.15 yesterday the Irish Times website carried a report that the company had decided to axe the route. That decision was made at a board meeting yesterday morning. The management then despatched 3 senior managers to Wellington Bridge to attend a public meeting where they were going to announce the closure. Before tea-time the CIE chairman announced the closure to the Oireachtas Transport Committee, about an hour after South East Radio relayed the news to workers and a shocked public. Last night I listened to one person tell that they had lost their jobs on the radio. By 7 the union had texted to say they would be finishing up in 3 weeks.
It was a deliberate and calculated attempt to undermine the meeting and present us with a fait accompli. It will backfire. It will galvanise the community especially in the light of the inability of management to answer questions at last nights meeting. The questions I want to know are
What will happen to services south of Wexford Town?
What is the status of the Fishguard & Rosslare Harbour Railway Company?
Why was the timetable altered in 2009 to remove connections to the boat at Rosslare?
Why was the commuter service between Wexford and Waterford not developed?
Why is the timetable being dismantled to prevent through journeys?
What is the source of funding to the WRC in the light of the 2009 requirement to run that service profitably?
In the meantime my intray is clogging up as people sign on the facebook petition. Irish Rail last night were long on obfuscation last night but short on specifics.
Posted by Unknown at 8:44 AM