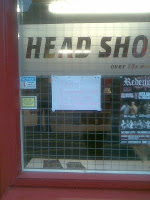 The end came very quickly for Wexford’s Head Shop. When government classified their products like BZP alongside other illegal substances the door was shut leaving many young people down.
Legally they went from high to low in one day. From the start I was concerned at the shop. Ironically I first noticed it the night that Wexford Borough Council had a presentation on drug addiction. I walked past the premises on the way to the meeting and saw nothing but when I was coming home there it was bongs in the window and signs up to let the public know that the show was on the road. How ironic and sad!

I’m glad that the government has put the uppers on a downer. The reality is that Ireland already has 2 drugs that we are struggling to cope with alcohol and tobacco. We’re cutting back the amount spent on mental health and at the same time storing up chronic problems by allowing alcohols targeted at a younger market on the off license shelf. Last week hundreds attended a meeting in Enniscorthy organised by the facebook group at which my colleague Cllr Pat Cody spoke where concerns were expressed at the prospect of closure of St Senan’s Hospital and the likelihood that Wexford would have no unit to deal with acute mental illness. Psychologists are queuing up to point out the danger of these drugs most unfit for human consumption. The big fear is that there will be an unprecedented increase among young people for psychiatric care as a result of these drugs despite the reality that psychiatric services are practically non existent for these people. Last year I remember Shane Dunphy highlighting on South East Radio the difficulty a local mother had finding a psychiatric bed for her daughter due to a shortage of beds. How poorly prepared would that sector be for a wave of teenagers suffering from the effects of these unsafe drugs?

Wexford’s head shop opened about 2 years ago. At first the shop was a novelty while it masqueraded behind a façade of being legal. Entry was limited to those over 18 although the age group I would regularly see in the vicinity of the shop tended to be the hoodie generation of teenagers.
Unfortunately the interest in following the legal route didn’t appeal to the head shops owner all the time as he was stopped on the N11 by gardaí who subsequently discovered a significant amount of cocaine (valued at 5 figure) in the vehicle. The owner was convicted of possession of the drug for the purposes of supplying to others. I note that others are concerned that head shops are effectively fronts that legitimise income from criminality. In Wexford’s case I’m convinced that this is the case also. I spare no tears for the demise of the business.

I’m not interested in the argument that closure will drive what is an illegal business back underground. True the government made money off the trade, that doesn’t make it right. I don’t think it’s relevant if alcohol is more dangerous. It doesn’t make alcopops right either. The reality is that alcohol concentration has increased markedly within drinks. The law as it is makes it illegal to sell alcohol to minors, yet teenagers seem to have no problem getting as much drink as they want.
So the trade will now go online. The government now has a breathing space while they wait for the market to react. Respond it will. But from where I see it any product that isn’t safe should not be on the market. In another context we often hear about light touch regulation and failure to intervene to protect the consumer or the citizen. I don’t see any difference in what the government has done. It’s not too long ago since pork products were withdrawn from the market because there was a risk to consumers. If head shops cannot guarantee that their products are safe then surely the state has the right to step in to protect the consumers.

In the meantime pigs will fly before the shops re-open!
Posted by Unknown at 9:39 PM

What is your stance on alcohol? Have you heard of the Lancet Report?

Irish society has huge problems dealing with alcohol and tobacco. The point of this post is that I don't think we are in a position to facilitate a third drug. I'm plased that tobacco smoking seems to have peaked, I listened to South East Radio today to hear publican say that sales werre down. We know that road deaths due to alcohol are on the way down too, this is very good news.