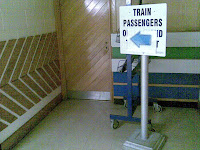 Well so much for consultation! It seems that the suits in Connolly have had their fill. Poor old Jim must spin in his grave at the thought of his name being associated with an arrogant and high handed management. To put it in one sentence the boys ain’t going to share their train set with anyone; not the Oireachtas members but most of all the people in the south east.
Today’s papers carry notice of intention to close the rail line between Rosslare Strand and Waterford. In a way it’s clearly an attempt to deflect from their current denous with the Oireachtas committee who want to ask them a few embarrassing questions. Lets recap how we got here. In March Irish Rail applied for permission to close the line in secret to the NTA. In April the company told the Oireachtas Transport Committee and residents in Wexford. As the opposition to the closure built up and submissions were made and points rebutted the Southern and Eastern Regional Authority stepped in. 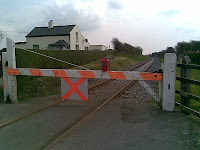 SERA sought tenders for a socio economic report on the future of the line from Limerick Junction to Rosslare Harbour. The NTA agreed to withhold a decision on the matter until the report was submitted. So as to expedite the process in the interests of Irish Rail the timescale of mid July was agreed by both bodies for an initial report and additional information within the following week. Arising from that the NTA would issue a decision. 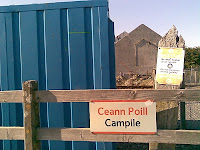 Once more Irish Rail have move to undermine the process, just as they did by releasing the news of closure to turn people away from the first public meeting. They’ve issued notice of closure in accordance with the 1958 Transport Act. That means that in 2 months time regardless of what anyone else says the line will close. Minister Dempsey says that he wants to move the rolling stock elsewhere and it was about resources. The company on the other hand say it’s about money that they haven’t got. Just as the company marginalised campaigners against closure, they’ve undermined SERA and the NTA. There’s only so many that you can do that to and get away with it every time. The hypocrisy of the companies claim about concern at increased emissions is exposed by the reality that they will now deploy 4 buses to bring 25 passengers and none of them will go via Bridgetown, Wellington Bridge or Ballycullane to get students into WIT for lectures. 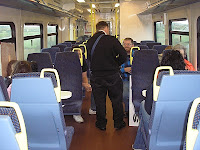 In reality it’s about having no interest in anything other than large urban areas, no imagination for developing services and no time for freight and Co Wexford. There is still a long way to go on this one. Irish Rail will have to give notice of intention to close to other EU carriers who will have the right to apply to commence services in Ireland. EU rules are interpreted in Ireland for the benefit of Iarnród Éireann and not the benefit of a developing rail industry. While we’re moving less by rail in terms of passengers and especially freight other countries are seeing freight returning to rail.

And what about the politics of all of this? For the Greens who aspire to a public transport policy? Minister Ciaran Cuffe said he’d support retention where a socio economic argument was made? Minister Dempsey by all accounts of the Wexford TD’s meeting was badly informed about the line but cared little. Will pressure grow on the 2 ministers or will they just attempt to spin a line that small populations of about 100,000 between Wexford and Waterford are not viable for a line. I bet they wouldn’t tell Jackie Healy Rae that!
If the Minster was half the idealist his spinsters like to tell us he is he’d haul in the chairman, sack him dismiss the board and tell the executives to either find ways to build up the line or find another job.
Posted by Unknown at 12:31 PM