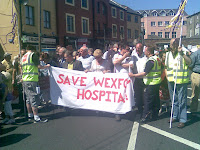 The sceptics got their answer today. There were those who said that the rally and march in support of the hospital would flop. There were those who would have loved to see the demonstration fall flat on its face today but in the end the people won out. Fair play to Seamus O’Brien and his committee who worked night and day to ensure a huge crowd turned out on the day. 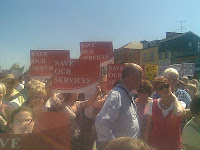 There were over 5,000 on the march in my view. Because the streets are so narrow its hard to get a full picture of the crowd but when the head of the march was at the lights at King St you couldn’t see the end of the march as it hadn’t got past Barrack St Post Office. The crowd were ordinary people from around the county, parents pushing children in buggies who were in all likelihood born at the hospital, elderly people who relied on the hospital for care, those of us whose only interaction was bringing a child to A&E and all points in between. The turnout was helped by the excellent weather but that’s not to say that the people of Wexford are fair weather friends of healthcare. We had to stop marching at the front so that the tail of the march could catch up. 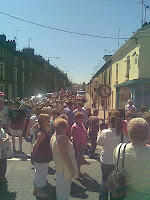 The reality is that Brendan Howlin told the crowd that soon the draft report from the HSE for re-configuration will be available to local deputies. The services we need to protect are 24 hour A&E cover, maternity services, Intensive care and coronary care. What is fundamental is the need to maintain A&E round the clock. A&E is central to any hospital as most patients enter through it as opposed to elective admissions. Recently more consultants were relocated (or even re-configured?) from Wexford to Waterford. Many people have said to me that the hospital is on a slippery slope and that its future is under threat. 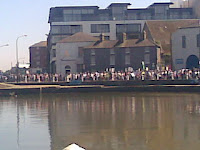 Minster Sean Connick’s admission at the rally that he wouldn’t vote against downgrading of the hospital in the Dáil genuinely shocked a lot of people there. He also effectively hung his FF colleague Senator Lisa McDonald, who at least had the guts to speak in support of the hospital despite being barracked by a section of the crowd, out to dry. When I left I could see a lot of people, mostly women one or two of them people I would know to be FF voters lining up to grill Minister Connick for his complacent attitude to the retention of the hospital.
Posted by Unknown at 10:21 PM