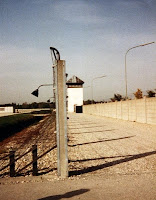 This morning’s attack by Israeli forces on the flotilla bring relief supplies to Gaza from Europe once more shows that Israel care very little about international law or opinion. They’re not the only ones, a few weeks ago another rogue state North Korea was deemed responsible for the sinking of a South Korean naval vessel in international waters. There are 12 Irish passport holders in the convoy along with an Irish registered vessel the “Rachel Corrie”. One of the Irish is reported injured, all are in custody in Israel tonight.
Recently I pointed out on my blog that it was time to send the Israeli ambassador home following from the use of Irish passports by Israeli commando’s to gain entry to Dubai to kill a Hamas official. I’ve no time for Hamas but they did win an election in Gaza and the naval blockade by Israel of the strip is illegal under international law s was the attack in international waters on a civilian convoy. Ultimately this attack benefits Israel’s enemies and make no mistake about it, after today they countries relations with Turkey in particular are worse off.

Another who is curiously quiet is President Obama. Recently it seems Obama left the Israeli PM abruptly in the White House to see his own way out! It seems that Obama has a different way to his predecessor and if that means that soon the Israeli government will smell the coffee and wise up then Barak has done the world some service. There appears to be no blanket statement of support from the US this time. Piracy in the Mediterranean is indefensible in the international community. Turkey is a key NATO ally for the US. Where does it all end?
Having seen the hold of one of the ships on TV, the convoy was bringing wheelchairs and cement. As a student I once lived close to where the Israeli team was held hostage prior to their murder at the Munich Olympics. Out the road from that is Dachau. 5 minutes in the grounds of the former concentration camp at Dachau hammers home the appalling sense of what happens when a society loses its values. That is what a rogue state is; one without values.
The ironic hope for Israel is that Germany is no longer a rogue warlike state. It’s learnt from its catastrophic mistakes. Hopefully Israel can too and when it does the world will be a safer place.
Posted by Unknown at 12:02 AM