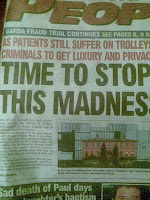 I came home from holidays to get the good news from a constituent that the council had turned down a plan to build a 5 storey apartment block in town. I was pleased as I believe that making observations on the planning process is very difficult for those who feel threatened by the prospect of over development and I was pleased that the council came down on her side.

Imagine my surprise when I bought my local paper, was this news mentioned? No, but what was exercising someone’s and I say someone because the story is not attributed to any journalist, on the front page? Why the application to build a new court house in Wexford that comprises of a basement, and 2 subsequent floors on top. The article criticises the OPW not just for the scale of the extension to the former Tate School where the court house will be located, but also the location and design of the new library in town.

I smiled as I read how criminals could consult in luxurious surroundings with their lawyers and how could this happen when patients could be on trolleys and pupils in prefabs and the local garda station remains cramped! The article ignored the reality that Wexford’s present courts are inadequate and not fit for purpose as it is. The picture used to illustrate the article seems to be part produced from plans however while size and scale are the same, the finish as lodged by the OPW is substantially better.

The article mentions child abusers, criminals, thugs, killers in true tabloid fashion but misses the point that Wexford Court is more likely to deal with other type of cases such as small claims, civil disputes, traffic offences, in camera family cases where the judge is deciding on the future of children or property or commercial cases as much as it is likely to deal with criminality. Implicit in the article is the suggestion that this is money wasted on the dregs of society. The writer doesn’t understand that there is a lot more going on in the court than the processing of the local ne’er do wells to the Midlands Prison.

A court is someone’s working environment and it’s a nonsense to think that courts are for criminals only. At present Wexford Court has no provision for victim support, IT for close circuit interviewing of children, family law cases that are becoming an increasingly large part of their workload, poor provision for holding prisoners, while the court staff work in stuffy and cramped conditions. Does the paper actually believe that it is madness to give a public servant a decent working environment, I wonder? Regularly consultations between client and legal team take place in the corridors of Wexford Court which is also the county council building. So anyone in to pay their car tax will at present rub shoulders with the thugs and child abusers that concern the local paper or possibly over hear their neighbours sorting out the final details of ending their marriage.

While the article dwells on criminals who are of course dealt with, it makes no mention of victims and their needs. Its only a few months since a victim of a sexual assault in Kerry suffered the ignominy of sitting in court close to here assailant while neighbours shook his hand. Its not good enough anymore that this can happen. If courts have to be rebuilt with secure areas to keep prisoners, decent working conditions for prison officers and gardaí and to afford witnesses security then what’s wrong with that? Last year I photographed a prison van parked illegally outside my own workplace, presumably because of lack of parking space at the court 1 mile away! 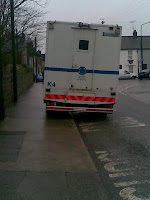 In terms of height the building is no taller than the office from which the local paper that thundered against the court house is printed! The only complaints I’ve received about the court service are that there aren’t enough judges to deal speedily with the workload on a given day.
While I entirely accept the criticism of the writer that “Planners have allowed far too much offensive development in Wexford”, its more the reason to highlight in the local media when planners actually do call it right by blocking real high rise in town.
Posted by Unknown at 1:02 AM