Campile 70 years on, can make us think again

At the week-end a memorial garden will be opened in Campile on the site for the former Shelbourne Co-op. I've been invited to attend. Campile is a small village of about 750 people close to Waterford estuary where 70- years ago the Co-op creamery was attacked by the Luftwaffe and 3 women died. It seems that the Germans were concerned that Ireland was supplying food to the UK during World War 2 and it was time to send a message to the neutral De Valera Government. Another bomber attacked the nearby railway viaduct at Taylorstown but missed.
The numbers killed could have been much worse had the attack taken place earlier as the restaurant where the bomb fell was full with workers. In the overall scheme of things in World War 2 the Campile attack was a foretaste of what was to come for Dublin and more significantly Belfast where hundreds died in a blitz. The German Ambassador will come to the ceremony. 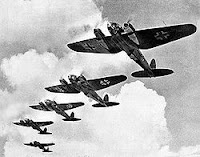 Ireland and Germany has always had a complicated relationship. Most Germans will have a strong regard for the Irish because they respect how Ireland stood up to Britain. The support for Irish Volunteers from Germany during the independence struggle may have been motivated by the need to occupy Britain in their own back yard. Despite sinkings of Irish ship by U boats in World War 2 a local Wexford boat the Kerlogue was famous for rescuing the German survivors from a sinking and landing them in Cork as opposed to Britain. One survivor had a life long friendship with one of the Wexford men who came to their aid.

I owe my education to the country because when I went to college there was no student support for me so each Summer I along with many other Irish Students worked our holidays in Germany. I travelled widely throughout Central Europe only being halted by the bureaucracy of the red tape at the Iron Curtain. Germany is an incredible country. I admire how the German people not just rebuilt their nation once but twice, after the fall of Nazism and later Communism. If any one has an idea on nation building it is the Germans, so what lessons can we draw from their experiences?

Lets be blunt about it. The then German Ambassador was the one who put his finger on what was wrong with Ireland a few years ago. When he spoke to a private meeting of German businessmen he was heavily critical of how we run the country. I share that obvious frustration that he had. Hypo Bank was on the verge of going belly up at the IFSC. Just as Campile gave the Irish people a foretaste of what was to come 70 years ago, Hypo was the warning sign that Lenihan and Cowen ignored and look where we are now, this morning our rating has dropped another notch as international concern grows at the ability of our government to cope under the burden of the commitment to prop up zombie banks.

Realism, criticism and long term objectives are what I hope we can draw from the Germans. It’s a country with a proud tradition in social democracy and free intellectual thinkers where left, right, liberalism and green values all compete with a different vision as opposed to the dull lethargy of Irish politics that gives us clichés like “We are where we are” which subliminally caution against change or debate. We can still learn a lot from the Germans and while the numbers game in the EU have changed greatly in the last decade, we still need them. Next Saturday is a good day, I'lll be there as Mayor, lets remember our dead together and think forward.
Posted by Unknown at 10:15 AM

Liked your comments on Campile bombing. I was one of the compilers of book and you are invited to the launch of my book title 'New Ross Rememebrs' on 7th Oct. at 8pm in the Brandon House Hotel.
sean crowley