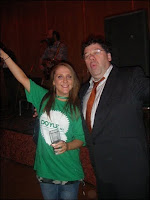 Kim Jong Il must be kicking himself! What does a man have to do to get a little respect round here? Newsweek has it seems drawn up a list of their fantasy top 10 world leaders. Heading their list of who’s hot is the Indian Prime Minister rapidly pursued by some of our European cowboys, Sarkozy, Cameron and our Brian Cowen. The man who a month ago was supposedly facing a challenge from Brian Lenihan is this month one of the world’s most respected leaders, well that’s according to Newsweek anyway! Kim doesn’t have to worry about challenges from colleagues which is just as well as he’s hardly up for the challenge of living. Like Cowen who once played Under 21 football for his county, the days when Kim could go round a golf course 38 under par are well truly behind him!
Saudi Arabian King Abdullah is in there too because he’s taken the radical step of appointing women to high office. Apart from Brazil’s President Lula there’s nobody progressive there at all. But given that the Saudi ruler who doesn’t have to worry about the niceties of democracy has set the bar so low, I wonder what exactly you have to do to impress Newsweek. Many of those who Newsweek respects are politicians who still believe strongly in free market economics, globalisation and unfettered capitalism. This is the dogma that has caused most of the problems in the first place. Despite freeing up of global markets, have consumers and I’m thinking of the sugar regime in Europe benefited from lower prices? No way. And while prices remain high, the sugar industry was dismantled importing low cost sugar and selling at a price that Greencore considered consumers could bear. Compensation went to farmers and the company while the consumer was left high and dry.

The Newsweek 10 are by and large a collection of market pleasers who will ensure that the state doesn’t get between speculators and money, unless of course in Sarkozy’s case you’re a speculator of a different colour skin or ethnic origin in which case he’ll send you packing. Strange that countries where the international banking crisis has had least impact don’t seem to rate when it comes to Newsweek’s top 10. Cameron is taking up where Thatcher left off with his small government is better nonsense. Perhaps he should have gone to specsavers or if not at least John Major? I've always regarded Major as being basicly a decent man who actually won an election his party deserved to lose. 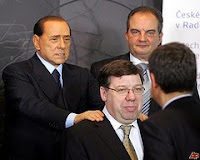 Australia, Canada, Denmark, Sweden, not all countries with left wing governments but countries with a regulatory framework better than ours where scandals like Anglo don’t seem to get a look in with the boys from Newsweek. Indeed no female national leaders should apply. At a time when competition in financial services is going out the window and banks spin that the days of crony capitalism are gone why then are foreign banks sprinting for the boat? Once foreign banks who on their arrival here a decade ago brought competition into the market place for a mortgage are gone, slowly but surely the cosy relationship between AIB and Bank of Ireland will see interest rates climb well beyond the ECB rate. Tracker mortgages are sadly now things of the past and one of the few big advantages of monetary union is disappearing fast as banks set mortgage rates well above the ECB interest rate. If you can get a business loan outside the state good but who’ll give you a mortgage outside the jurisdiction for an Irish property? SME’s are similarly screwed when it comes to getting cash to simply expand even where a viable market has been identified. The genius that presided over this mess, is now deemed worthy of internatinal respect by Newsweek!
Sadly for Fianna Fail Newsweek sales aren’t very high among the unemployed, those dealing with welfare cuts, or coping with increasing mortgages on lower income, but expect more of this sort of guff in the next few weeks.
Posted by Unknown at 11:41 PM