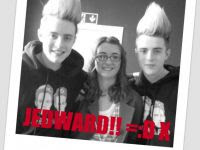 This is the week when the media rediscovers education. They hardly mention education once the state exams are well under way in June unless there’s a typo or a mistake made. So the slumber is over and soon the journo’s and cameras will be back at the school gate as those leaving school exit with their 7 A’s and later next week when the school year re-commences.

It annoys me that the mark of success is still considered to be 7 A’s and medicine in TCD or UCD. It conveys the wrong idea of what a school does and what it should be. I wonder is that because many journalists are middle class or identify with middle class aspirations or values. One of these values is a middle class career; medicine, law, engineering and yes teaching! My case is that while these jobs are important in any society and we should as a society ensure that we train enough of them, should we elevate them beyond their societal value to positions of economic value where students compete with one another for notional credits call points. Points are merely notional and cannot be traded and are simply a rating.
Those who can collect enough of these invisible commodities will do well while those who are not successful are considered surplus to the middle class. A number of years ago I heard a remark being made by a parent rep on local radio that “sure if you didn’t get a course there’s always a trade”. It reminded me of the way my old school, presumably hopeful of a vocation of two, in the 1970’s steered subjects to the top stream of Latin while the bottom stream did Commerce. Now we know who was done the favour!
2 things worry me. One is that we encourage a set of values of safety in our educational choices. No other nation does this ritual annual oohing and ahing as the competitors for points race to the college gates. If we encourage safety in early age will we foster creativity and risk taking?
The second thing that concerns me is what is being lost to our society by the artificial filtering from our education system that the points race achieves? Should colleges not encourage inward and outward movement of students and staff? If someone has a good idea worth commercially developing why should they wait to get their “Q mark” of a degree before striking while the iron is hot? Particularly when it comes to technology nowadays where there exists a flux of change and quickly an idea can be outdated. If you remain in college will the opportunity still exist for your idea when you graduate? Is a herd and “safety first” mentality still best to bring out the best? There is one example of a successful Irish industry where a degree doesn’t advantage anyone and that’s the entertainment industry. Few of those who are successful internationally and internally in Ireland have gone on to 3rd level. Entertainment is a ruthless industry where only the best will succeed across all its diverse sectors. Why can we not replicate this approach in other areas of our economy? There is another alternative to college in the context of a collapse in the Irish economy will soon be seen as youth emigration but you don’t have to leave the country

So avoiding this cul de sac may actually be in the interest of the leaving cert student just as years ago avoiding Latin gave an unintended advantage to my old schoolmates. I never studied business but I can still remember the first declension from latin.
Now where’s my ticket for Jedward?
Posted by Unknown at 9:17 AM