Browne’s politics of the asylum

Its not so long ago that John Gormley compared being in government to an sylum It seems that our local FF TD John Browne has taken this suggestion with gusto judging by the PR disaster that was the FF Wexford General Election Selection Convention. While the Wexford Labour convention was a vibrant and optimistic, Fianna Fail was predicated on the back of a internal sounding showing that they are unlikely hold their 2 seats. Subsequently the party decided to run just 2 candidates presumable the sitting TD’s, Minister Sean Connick and John Browne.
Wexford born Minister Dick Roche was scheduled to chair the convention at what should have been a shoe in. In fact few would have noticed the convention was being held such is the low esteem the party is held in Wexford until veteran TD John Browne who topped the poll just 3 years ago woke up to the reality that Labour’s Pat Cody who works in the local psychiatric hospital in Enniscorthy was eating into this support in the district. St Senan’s is threatened with closure and Browne had continuously pointed to a government commitment to build an acute psychiatric unit on the grounds of Wexford General Hospital until earlier this week when the HSE said that acute psychiatric services for Wexford would be relocated to Waterford or Wicklow. This move would damage Browne’s standing and a continued slump in his personal support would have left Browne behind Cody and more crucially from Browne’s point of view Minister Connick meaning that his seat was in jeopardy. As a result John Browne threw a wobbly resulting in the deferring of the convention until January.
John prides himself in Fianna Fail’s support for the health services in Wexford, indeed he wrote a letter to Wexford Borough council lately lecturing members of this fact. No downgrading of Wexford hospital services is a FF mantra of late locally. To underline how desperate things are now in FF, Browne hung his FF colleague out to dry by siding with the opposition TD’s like Labours Brendan Howlin in pledging to change the minister’s mind on the matter. 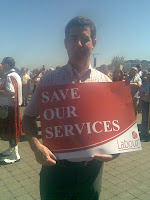 How times have changed in the last 10 years! When Wexford Electronics closed during the General Election in 2002 there was no wobbly by Deputy Browne despite the fact that many experienced workers got a lousey redundancy deal. They protested locally and at Leinster House, all to no avail. Clearly the Gormley’s politics of the asylum speech has now struck a chord with John and he sees it as throwing him a lifeline in the General Election. As to why John wants to stand, I don’t know. FF may be heading for opposition but I always warn against taking the voters for granted. FF may not do as badly as forecast, FG, Labour and Sinn Fein may not have the election there way, but it’s hard to see FF in office after the next GE. Fianna Fail shafted him from ministerial office at a time when he was openly speculating about being elevated to the cabinet. He owes them nothing.

Who Fianna Fail has as their candidates for a toxic party is a matter for themselves. The word is out that they neither have enough canvassers to conduct a broad sweep of housing estates in a canvass nor enough voters in Wexford to elect 2 FF TD’s. I believe FF candidates will be targeting those who they have on their data bases and ensuring that these people will turn out on polling day as they hope to reverse negative opinion polls. Browne’s shenanigans is a wonderful compliment to Pat Cody and the Labour Party. John is not worried about Sinn Fein or the ULA candidate but Cody’s presence right in Browne’s back yard has the potential to quote Browne’s hero Bertie to “upset the apple
Posted by Unknown at 12:13 AM