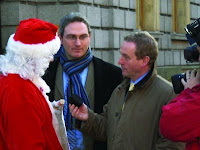 According to the Iris Independent Labour and Fine Gael are at war regarding their policies on tax. Wars are usually events where medals are handed out to those who show bravery and initiative. The indo was the paper that famously gutted the Rainbow on polling day in 1997 when everyone wrongly assumed that there was a total moratorium on election coverage with it infamous “Payback” headline and editorial that swung the election for Fianna Fail and the PD’s.
That election was decided on the debate between the McCreevy argument for reducing taxes and the more progressive Rainbow case to widen bands and take those on lower income out of the higher tax rate. Bruton and Spring argued that equity and the need for those on higher incomes to make a greater contribution required those on higher incomes to pay more as oppose to the simplistic FF & PD plan to cut everyone’s tax bill. It was slam dunk when the Indo group annoyed at what they saw as Alan Dukes’ prevarication at handing out licenses for terrestrial re-broadcsting to the INM backed the opposition to get its way.

Irony of ironies, 13 years on. Alan Dukes is now winding down the banking poster boy of the Bertie Ahern era Anglo, and there is another debate on taxes, this time FG are reluctant to cut taxes for the rich and want those on low income to pay more tax, an approach that brings it closer to Fianna Fail than it has ever been before while Labour sticks consistently to the line that those on high incomes must make an equal contribution.
And the Irish Indo true to form presents the different budget approaches between 2 different parties as a war. This is a nonsense and trivialises what are fundamentally more significant differences and camouflages a sharp change of direction on Fine Gael’s part. Once more at a crucial stage in Irish politics the indo misrepresents events. What the war between Labour and Fine Gael is about is who will lead the next government rather than what its tax policy will be. There are lots of differences between FG & Labour. The headline implicitly suggests that Fianna Fail is by some reckoning a major player in events. In fact they’re not and won’t be, period.

The real debate is an intellectual one as to what will be the choice that voters will have at the 2011 General Election. You can have a Labour led government whose policies will be fiscally Kenysian with a stimulus package while at the same time tackling the burden left by the Greens and Fianna Fail by negotiation with the EU & ECB or you can have one that will be Fine Gael led that will be effectively neo-liberal that will cut spending in line with Fianna Fail policy and while will re-negotiate with EU & ECB will do so from the point of front loading the pain.
There are 3 effective choices in play; Labour and Fine Gael where a deal is done although Fine Gael say that €6B in cuts are their minimum so that option seems now to be harder to achieve. There’s the second option of Labour SF and the independents and Uncle Tom Cobley! Not very stable and no chance of a majority in the Seanad and won’t last a week. There is the final irony and perhaps the option that may Fine Gael may be considering now. A neutered and significantly smaller Fianna Fail propping them up either in or out of office in a reverse Tallaght Strategy! If Dukes can a generation on repeat his gesture at Anglo could Fianna Fail repay FG by minority support after the 2011 GE?
The more I hear of Fine Gael and the more Enda Kenny is being hidden from the public the more I think this option may be now going up the FG agenda although they may not admit it for obvious reasons since FF are toxic.
From my own point of view that’s their business, either GE 2011 will see the end of FF as a part of government for many years or the consigning of civil war politics to the bin. Either would be a good thing. Fianna Fail only want to be in power and will subvert anything to achieve that end. So I’ll live with FG & FF cosying up to one another. Jose Murinho described a recent punishment as a medal and recognition of what he does and how well he does it, Labour may well be on their way to ending up with the medals after the election but that won’t that revive our country if they are shut out of office.
Posted by Unknown at 12:53 AM

I believe the election moratorium is for broadcast media, not newspapers.

My recollection was that there had never been a headline like it on polling day. Sunday papers did in the past recommend who they would support but it was the timing and the content of the page 1 article that blew away the Rainbow in wht was a close election.
About 10 years ago there was legislation proposing limmiting polls during an election campaign but when it transpired that they cold be issued on polling day the legislation was withdrawn