Our word is our bond!

Remember John Bruton? John was the last non FF Taoiseach who in his short period in office who led the Rainbow Government. John spent most of the last decade as EU Representative in Washington. Now on the eve of the ousting of the Fianna Fail government, John has spoken about the economic crisis that this new government faces from day 1. Strange that it seems to be the prerogative of former Fine Gael leaders to put their successors on the spot, Alan Dukes fronts up a banking pariah, Garrett Fitzgerald supported some aspects of Fianna Fail and Green banking policy while Michael Noonan ditched the Fine Gael economic stimulus plan as soon as he was appointed Finance spokesperson.

John reminds us that our word is our bond as a nation. Implicit in this is the suggestion that credibility is only something that a nation should worry about. So we should stand by our EU partners in the commitment to pay interest rates that will strangle our economy. I don’t agree with John Bruton, he’s wrong. A country that enters into agreement to pay what it cannot afford has no credibility. Our word and our bond have been devalued. I don’t like when someone puts on the green jersey to appeal to us about saving the country when in fact they prefer to save the economy.

While I don’t suggest that you should randomly burn bond holders the sooner some subordinate bond holders understand that they will not get their bonds cashed for some considerable time and that the effective value of what they think they are owed may not be what they expect and that they should plan accordingly for their own black hole in their accounts wherever they are, the better for everyone. Reputational damage happened long ago, there’s no such thing as a reputational transplant! 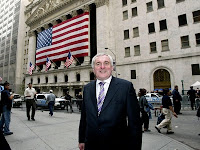 What people wanted in the General Election is a straight up honesty from the new government. First in line for realism should be the sub-ordinate bond holders and the ECB. The people will accept honesty and what it entails if they see those who could have done something been told a few straight facts. But let’s not forget our own Sir Humpreys in the Central Bank and the ex Regulator who failed to do their jobs. I hope that one result of the new government will be that the facts of how Fianna Fail and the Greens crashed the economy can be set before the people. Honesty doesn’t cost much and if that’s all we as a country can afford then it’ll be a sobering day for all.
Posted by Unknown at 11:12 PM