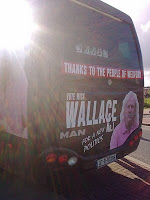 Well elections always bring surprises and this one is no difference. It’s a long time since Brian Dowling forecast a few days ago that a Fine Gael majority was a foregone conclusion. Not now. More like Big brother Brian Dowling than pol cor Brian Dowling.
Wexford has turned up a surprise in the way that Mick Wallace has topped the poll, not so much a huge shock that he got a seat but more the style of his victory. An important soccer match delayed Mick’s arrival at the count but he was there when the returning officer declared him elected. Brendan Howlin has an astounding number of 11,000 votes up by 10% since the last General Election and Brendan will get the second seat.

Seán Connick is very vulnerable and may be eliminated, another elimination that could prove key is that of ULA’s Seamus O’Brien and SF’s Anthony Kelly. The destination of their preferences will determine the hopes of Labour’s Pat Cody. Pat has been an outstanding candidate and has polled about 4,500. He is very transfer friendly and may attract preferences as the last left winger left standing. It’s going to be a long night ahead. Mick Wallace is entitled to his triumph having campaigned on the slogan Wallace for Wexford however his remarks subsequent to his election to the effect that he sees himself as a national politician and not one who is concerned about hospitals or potholes may come back to haunt him as serious questions hang over the future of Wexford General Hospital. 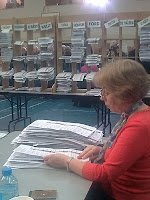 On the national front never has Labour got as many votes and never has the party got as many TD’s. The Gilmore Gale has blown although like most gales it isn’t as consistent across the country but the prospect of 2 seats in some constituencies is a basis for progress. 4 years ago I remember that FF supporters sniped at Labour to say that all the TD’s were old and that the party was dying. Not anymore and there’s plenty of new blood that will take the party forward. The Spring tide can be left in the past and let’s move on build further.
Looks like a coalition between us and a chastened Fine Gael some of whom 9 months ago were opposed to Enda Kenny even in Wexford. I’m delighted to see Brendan Ryan perform so well in my old stomping ground of North Dublin.
I predict an extraordinary battle between Michael D’arcy FG and John Browne of Fianna Fail for the last seat. It’ll be down to a few hundred votes and a late night in Wexford. Anyone for a recount?
Posted by Unknown at 6:43 PM