Tales from the canvass; Sprinting a marathon! 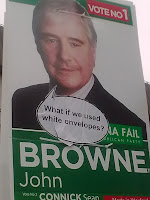 After the phoney war comes the campaign. After the campaign comes the vote. After the vote comes the count and after the count comes the post-mortem. If you survive all that, there’s the chance of being in government. So the good news in Wexford is that we’re not even half way through General Election 2011 despite what the papers will tell you!
I’m already putting a few of our “windfall” posters by as I’m beginning to suspect we’ll need them for later in the year. My view is that nationally Fine Gael will exceed 70 seats and will seek the support from independents. The independents don’t need to be like minded, I could think of a few so called left wing independents who would walk willingly into FG’s arms if they could gain influence. The possibility of the Greens surviving and scotching FG’s manifesto pledge for reversing the hunting ban in return for a continued Green presence in the Custom House is also in the mix. Add to that the Sunday Independent business editor, fund manager Shane Ross who would see common cause with the right wing of Fine Gael in hacking at public services, or as they call cuts now “doing the heavy lifting”.
The mood music from Fine Gael has been extremely hostile to Labour. It’s not personal it’s policy. Lucinda Creighton who recently threatened to quit if not considered for ministerial office seems to have had second thoughts judging by her attack on Jack O’Connor’s call on union members to vote Labour. The subliminal signals are FG want an overall majority with the proviso of being nice to everyone that you meet on the way up as you may just need them on the way down. So sweet talk while firmly letting them know who FG thinks is boss. I think FG is making a huge mistake, one that will undermine the new government with whoever ends up in government with them and I’m of the view that it may not be Labour.
So lets just tease this one a bit and think past next Friday. The worse place to be next Saturday is in opposition. Look who you’ll be alongside, FF, SF, ULA (strong personalities but no agreed leader). Labour may well be there, may be not! Some independents some independents may be not. There is no way into government from that position and FG know that well. So the divided nature of the opposition will play into FG’s hands in the next Dail. But taking a divided opposition for granted may cause a government problems. 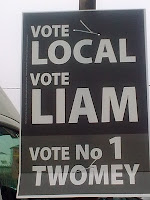 So given that the FG led government should last 2 full terms that will see Enda Kenny into retirement, and then who leads FG? One of the turks who eats dinner in the evening who seemed to lack political nous last June? Can’t see Labour last long in that government after Kenny, can you?
If they go the Indo route, some independents will be favoured over others, how long will it take for one or 2 to do a George Lee? Would FF gene pool independent TD’s who see themselves as only delivering to their area be acceptable as FG supporters to the D4 urban support? How long would the reported love affair between Fine Gael and Dublin last once FG’s rural tendency find their voice in power? 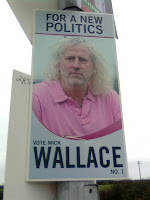 Will FF offer support for FG if they follow the 4 year program as set out by the outgoing government and will FG walk into that trap?
So, in the meantime the pitch for votes continues in Wexford. Liam Twomey’s posters implicit beg Labour supporters for preferences by his suggestion that they vote local vote Liam. There’s one of those on my road but I’ve never seen Liam in the area!
John Browne seems to have a poster malfunction with plenty of speech bubbles popping up on his posters suggesting that John didn’t exactly look after the interests of the people. On Wednesday Eamon Gilmore will be in Wexford to support Pat Cody and Brendan Howlin. This campaign will go down to the wire on Friday night. The race is still on.
Posted by Unknown at 11:05 PM