I give you Michael D Higgins 9th President of Ireland 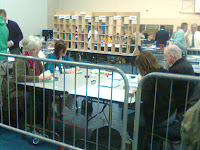 I’ve just been down the Wexford count to watch votes being counted. It’s not as hectic as a Dail or local election as the candidates aren’t there. The boxes I saw tell me that Sean Gallagher has done well in rural parts of Wexford but urban boxes have yet to be counted. Michael D Higgins is doing much better than expected. In one box I saw from Adamstown the votes were effectively divided between Gallagher and Higgins on a 60/40 basis with 10% for all other candidates. There are over 200 boxes here and the majority are not yet open. Votes have to be separated from referenda ballots. The count will not finish tonight. Given that the Wexford boxes have yet to be openend I beleive Michael D will top the poll in this constituency.

Michael D has a strong local link. I was delighted to see Paddy McKiernan and his daughter. Michael is a brother in law of Paddy’s wife. Michael D’s niece is Paddy’s daughter, both pleased and clearly proud of the national trend and the clear indications from Co Wexford. Their moment is coming. The Irish presidency is the one political office that has retained respect because of the integrity of the office holder. Voters believed that a Sean Gallagher presidency would damage that. That is why Michael D Higgins is going to win in Wexford and also nationally.

I am surprised that Gay Mitchell hasn’t performed well as there is a strong Fine Gael vote in Wexford. I understand exactly why FG members nominated Gay. No party member likes head office telling them who to select. No TD likes to be sidelined by head office who do not run for election. Sinn Fein will have achieved the scalp of Fianna Fail. Beating Fianna Fail is what Sinn Fein wants. They want to be the main opposition and nothing will stop that project. Any hope Fianna Fail has of reviving its moribund organisation is now in tatters. I didn’t see anyone that I recognise from Fianna Fail at the count in Wexford. When did that last happen? Not even the tea is boiled in a Fianna Fail kettle in Wexford anymore.

Sinn Fein may reflect on this election as a missed opportunity when the dust settles. I’d have expected them to perform better than what I’ve seen in Wexford today. As for the other candidates there is little in Wexford to cheer them up. Mary Davis, David Norris and Dana all doing poorly here. Another notable achievement is passing under the radar. Patrick Nulty is winning the by-election to replace the late Brian Lenihan in Dublin West. This is significant as one more constituency will now have 2 Labour TD’s. Not since 1982 has a government won a by-election. This is great achievement for Patrick and his supporters in Blanchardstown. Well done, a great day for Labour. We’ve held our place in the polls and are now winning seats. At the end of the day that’s what counts.
Posted by Unknown at 12:36 PM