The annual OECD Report into our education spending came out today. It’s not a pleasant picture despite all the promised spending from Fianna Fail ministers down the years. But OECD reports in the past hardly gave this administration glowing reviews. In 2003 the OECD reported that our schools gave good value despite their under investment. 5 years on what’s new? Precious little but at least now we know how bad bad actually is. It seems that when compared with other developed countries we lag hugely the amount of wealth that our government spends in education. The figures come from 2005.

Lets look at specifics. Mexico, where the school leaving age is 15 as opposed to 16 here, still spends more of its wealth on education (6.5%) as opposed to our value of 4.6%. 2005 was the year when the newly appointed Minister Mary Hanafin who had just said that school buildings were to get more investment and that the proposal to have a PTR of 20:1 by 2007 was a noble aspiration returned €50M to the Dept of Finance unspent at the year’s end. We spent slightly more here than Greece where the school leaving age is 14½.

Lets look at another set of figures. When Niamh Breathnach was Labour’s only Education Minister ever in 1995, she spent 1.3% of total wealth on 3rd level. Subsequent to this Niamh Breathnach introduced free fees which meant that the total payment for a smaller student body to third level went up significantly. By the tim

e Mary Hanafin was in charge in 2005 the allocation to 3rd level fell back to 1.2% of GDP and that includes paying student fees. Now we know why University heads want the return of fees and the suggestion that they be only for well off is a fig leaf because the level of chronic under funding which the government has presided over in the last decade will not be addressed by the €20M it is estimated they’ll raise. If its €20M you want why not auction off the Book of Kells!

nly 4 other countries surveyed by the OECD were lower, what a way to start a millennium. In 2005 we spent about 40% of what was spent in Luxembourg on each second level students. At this time only Luxembourg’s per capita income in terms of GDP earned more than Ireland’s of any other EU country.

Given the neglect and the political reality that the Greens are talking about a 5% cut in government spending and Ciaran Cuffe’s view that means testing should be used in regard to 3rd level fees there’s no sign that this government is for turning. Cuffe’s comment is a U-turn for a party that said a month ago that university fees were not part of the programme for government. That’s a shame for t 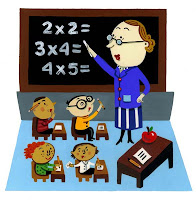 he 40K kids who’re taught in draughty prefabs and the 100K who are in classes of 30 or more. Some time ago the present Minister was elected on a commitment that for children under 9 a PTR of no more than 20:1 would apply.

Labour has called for a target of 25:1 PTR and primary level, a programme of school buildings and a targeted investment to deal with disadvantage. The Green Party entered government with a ring fenced budget to deal with disadvantage. I’ve never seen so much as a bob of it spent in Wexford. Time that they started delivering. This is one subject that’s not going to go away.

We've got problems with schooling and expenditure on same in Ireland, but things seem even worse in England and Wales, if this report in The Times is to be believed:-

A survey of education by the OECD suggests that Britain must try harder..." etc.

Hello Gareth,
Thanks for your comment. Education at a Glance gives a good comparison between various countries with widely different systems. Within the UK there is the English & Welsh system, Scotland and also the north's.
I always believed that one of the benefits of our (& Scotland's) system was the broad range of education. There exists enormous potential for our system however the reality is that the OECD has recently being pointing that Ireland has being under-funding all sectors. The British system has in the past 15 years been further changed by allowing PFI schemes which cream off good comprehensive pupils into specialist schools. I wonder at he advisability of specialising at such an early age.