Anglo Irish Bank’s Chairman Sean Fitzpatrick has resigned after it emerged that he had loans of €87M off the balance sheet to support his investment in the bank. Mr Fitzpatrick had a facility to arrange personal loans from the bank and to re-arrange these loans with another bank temporarily for 8 years on his own admission. These loans were not declared on the Anglo Irish Bank accounts. The bank proposes to include the loans on the 2008 set of accounts. Another director Lar Bradshaw has also resigned. Fitzpatrick claims he (Bradshaw) was unaware of his financial arrangements.

My initial response is where was the auditor and how could a loan to this extent have been missed? The auditors are Earnest & Young a highly reputable firm. To make matters more interesting the Minister for Finance, Brian Lenihan TD tonight says that his commitment to underwrite the capital needs of Anglo Irish Bank and to ensure its "long term strength and viability as a bank of systemic importance in Ireland. This bank is not just a zombie bank but it seems as essential to FF and their developer friends as Banco Ambrosiano was to the finances of the Vatican City. 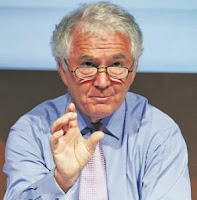 In 2007 Fitzpatrick slammed the regulatory regime of the financial sector as “Corporate McCarthyism”. Fitzpatrick said that Ireland’s current economic success was almost entirely due to the country’s entrepreneurs and had little to do with politicians. "You can’t keep good people down forever. It is time to shout stop. The tide of regulation has gone far enough. We should be proud of our success, not suspicious of it. Our wealth creators should be rewarded and admired not subjected to levels of scrutiny which convicted criminals would rightly find intrusive.", he said.
Tonight he seems to be of a different frame of mind “My decision to tender my resignation has been prompted by the fact that at the 30th September, 2008, I had fully secured loans, on normal commercial terms, with the Bank totalling €87 million which will be included in the annual report for 2008 in the note relating to Directors’ Loans. This balance is substantially higher than in the 2007 report because in prior years I had temporarily transferred my loans to another bank before each year end. I had done this on my own initiative over an eight year period. The transfer of the loans between banks did not in any way breach banking or legal regulations. However it is clear to me, on reflection, that it was inappropriate and unacceptable from a transparency point of view.”
Personally I feel there is surely more than to this than meets the eye. I find it incredible that a CEO could go transfer cash without someone somewhere noticing something askew, either in the bank or in the audit. Are the account holders in the bank being taken for a ride? Even still? The Irish stock exchange launched an inquiry into share purchases by Fitzpatrick in the run up to FF, FG and SF deciding to provide a guarantee in September.
Earlier this year Mr Fitzpatrick said he believed the Irish people owed him a debt for maintaining his investment in the bank. Mr Fitzpatrick recently advised the government to cut child benefit, sack civil servants and cut back on spending.
Mr Fitzpatrick has also resigned as a non executive member from the board of Aer Lingus the national airline currently the subject of a take over proposal from Ryanair, Smurfit Kappa and Greencore. Greencore and Michael Smurfit were also the source of other business scandal in the 1990’s arising from allegations of a financial golden circle surrounding then Fianna Fail leader Charles Haughey. He also said he slept well the night of the €400B bailout that kept Dail Eireann working through the night, presumably he may now have difficulty tonight on this score.
My own concerns are that something may well happen in the near future in the banking sector. Christmas will provide the cover when markets are closed to make the move. Shares in Anglo Irish will be under pressure tomorrow if the suspicion is that there is much more to this than meets the eye. The only way to stop this type of instability is for the state to nationalise the bank. Watch this spot or blogpsot!
Posted by Unknown at 10:53 PM

When Anglo Irish Sails Away Does The Galway Tent Buy Sandymount Strand With Your Tax Money?

Anglo Irish Bank made a loan of €288 million enabling a consortium to buy the Glass Bottle Factory for €412 million. This factory is sited on Sandymount Strand and has been liberated from public ownership.

Guess who benefited in the form of substantial bonuses, options, revolving doors and other compensation. Could it be the gentlemen (a) slagging BIFFO and McCreavy as they departed AIB HQ on a wet night in Ballsbridge around 9PM on the Tuesday after BIFFO's deal? Their secretaries were a few hundred yards away (b). The Horse Show House was deserted. Crowe's was packed.

I now understand that the Bank's CEO David Drumm has offered his resignation and will leave the bank as soon as an orderly transition has occurred. I'm trying to type that with a straight face!
I also understand that Anglo Irish Bank had a circuitous arrangement with Sean Quinn which recently came to light. My interest is when did the Financial Services Regulator come to know about Quinn and Fitzpatrick and his movements to Irish Nationwide?
This scandal goes to the core of the political business clique that have prospered in the last 15 years.

Seems to me that what he did should have been against banking and legal regulations; why wasn't it? Why would another bank accept the transfer of his loan (a debt, not cash presumably) unless there was something in it for them, reciprocity perhaps? Precisely what were the commercial terms he refers to? What assets were the loans secured against and what are they worth now? What did he do with the dosh? Is he in a position to repay the loans and are they going to be called in? Why was no announcement made when the regulator found out about the loans?

I am in my seventies,have no occupational pension but invested some of my savings in Anglo shares many years ago; earlier this year they were worth over £80k, now peanuts and may be nothing. I feel entitled to answers to these questions; how will I get them?

I cannot say how sorry I am for the financial situation you find yourself in. Any comments I make cannot take away the worry that investors like yourself feel. I do not believe that both the CEO and Chairman were the only people who knew anything about this. I suspect it is going on in other financial institutions, Sean Quinn is a key investor in this bank and was subject to a significant fine this year in relation to monies not declared at the time of the BUPA purchase. I strongly believe that the financial services sector needs a strong regulatory regime and accountability in the interest of the shareholders. Transparency is opaque to say it mildly at present. There is a politico-business clique who redesigned our economy around their interests about 15 years ago and the chickens are now coming home to roost for them and their only solution is reduce the public service, increase hospital waiting lists, take your medical card and teach in over crowded classrooms.