Bob was born in North King Street, Dublin in 1916 as part of a family of five children, This part of Dublin was the scene of much fighting during 1916. He joined the IRA as a teenager. He became politically active in the 1930s, and a beating by Eoin O'Duffy's right-wing Blueshirts after one demonstration left him with permanent damage in one eye. In 1937 he went to Spain to fight fascism. After working his way through France he arrived in Valencia and joined up with the republican force where the skills learnt from his IRA-days were put to use training foreigners entering the war.
However, he disobeyed orders and joined a group heading for the front line. He was eventually captured and interned in a concentration camp before being released as part of a prisoner exchange in 1939. In an interview with The Irish Times Bob Doyle said he felt the battle in Ireland and Spain were one and the same. "I thought there was a danger that Ireland would go fascist and that was one of the motivating factors in making up my mind to go to Spain," he said. "I didn't know much about Spain, but I knew my thoughts were that every bullet I fired would be against the Dublin landlords and capitalists." 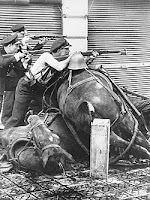 Mr Doyle returned to Spain many times since as his wife was Spanish, and he also worked with the underground during the years of dictatorship. An avowed communist until the end, Mr Doyle remained active in politics speaking at meetings through out Europe right up to his death. In 2006 he released a record of life’s work in a biography Brigadista - an Irishman’s fight against fascism.
I never met Bob but I admire his idealism and his belief. I understand that to mark the 50th anniversary of the wars end surviving veterans were given honorary Spanish citizenship. I wonder what Bob would have made of the colapse in Spanish and Irish capitalism almost 60 years on from the end of the war.
It is hard to understand now how anyone could be so dispised and feared, but Franco earned every last bit of it. My recollection of the end of fascism was that Franco knew the end was coming and that he had lined up his succesor Juan Carlos but resolutely stood firm against any other intrusion. Pleas to commute death sentences were responded to by using a firing squad rather than the inhumane garot to execute. I once worked with a Spaniard whose early years were towards the end of Franco's reign. She vividly described the shear hatred there was for Franco in her home. As Franco lay on his death bed rumour's spread that he had already died so her father and a few friends opened a bottle or 2 in reief only to discover that when they sobered up he was still alive! When Franco eventually died she told me that they ran out of champagne in Barcelona!
Well done Bob Doyle on a long and active life, may the sod lie softly on you.
Posted by Unknown at 4:55 PM

I am sorry to hear of this gentleman's death, I didn't know much about him but I had heard of him, and I am fascinated by the history of the Spanish Civil War. Having a son in Catalunya has reawakened an interest ignited years ago when I read Laurie Lee's account of his journey to join the International Brigade in As I walked out. I have read some good books in recent years, one being Anthony Beevor's tome of the Civil War.
There is an interesting book about the Irish in the Civil War - can't recall the author offhand - showing the clash between the International Brigade and the ragtag band of Francoists brought out by our home grown Blueshirt O'Duffy, who were pretty ineffectual by all accounts.
Giles Tremlett's The Ghosts of Spain looks at the post-Franco years in Spain and the legacy to the present day, he was/is a Guardian journalist and it is a fascinating book.
It is always sad when the end of an era is reached as it is with this man's passing, what an idealist he must have been. I would love to read his book, is it available? Must check it out.

More on Bobs death on my blog at an unrepentant communist...