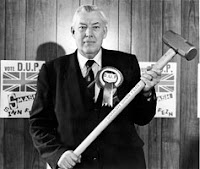 For a week Pat Kenny has been hyping the appearance of former First Minister of the Northern Assembly Ian Paisley on The Late Late Show. Ian, the man who said “not an inch” and “Seal the border” and Pat, the man who ended up in court in a boundary dispute with his neighbour, it had all the makings of a hum dinger. However Pat let the cat out of the bag when in introducing Ian when he said the focus would be on his private life.
With the giggling audience and Ian junior smiling all the way through the show, it seems as if Martin’s part as a Chuckle Brother has been replaced by the now sidelined Ian junior or Ian Óg as some people call him. I wonder what those who followed him down the road to gaol would think of the love in?

Pat Kenny missed a golden opportunity to ask Paisley how he would react to Major Ronald Bunting’s remark that he regretted ever meeting him? Given Paisley's now avuncular public persona, surely such a staement is now more relevant than ever? Not one mention in the interview of anyone of the victims in the northern troubles, many of whom are in a premature grave because of Big Ian. Pat Kenny returned often to ask about religion, interestingly Paisley seemed to infer that Catholics weren’t true Christians and needed to convert in order to be saved while his wife Lady Paisley referred to “So-called Loyalist Paramilitaries”. The reality is that many “so called loyalists” manned barricades to bring down the 1974 power sharing executive at the request of her husband. To my mind Gerry Fitt was a man before his time, not for nothing does Seamus Mallon refer to the present process as Sunningdale for slow learners.

However the distribution of slow learners is equally distributed across the sectarian divide in the north. Earlier this week there was an extraordinary scene when many relatives of the victims when were addressed by the Bradley/Eames commission on their proposals for dealing with the past. Raw tension re-surfaced as the meting got under way when another who shares responsibility for the slaughter, Gerry Adams, was taunted by relatives of protestant victims. While Gerry faces into an uncertain future as President of Sinn Fein in the light of his poor leadership in the 2007 General Election, Ian seems to relish in his “One Foot In The Grave” routine, a cross between a latter day St Paul after Damascus touring the dominion with his words of wisdom for a new generation and a dotty grand uncle where the audience is invited to omit what happened in the black and white TV days. Gerry Adams has been there already.
Tonight’s interview comes almost 10 years on from Gay Byrne’s sucker punch on the Late Late to Padraig Flynn and 10 weeks from Rody Molloy’s implosion on Kenny’s radio show. It can be done on this show and also by this host but tonight won’t be one of those nights that people will talk about in years to come.
Posted by Unknown at 11:34 PM