Price for Brown’s jobs gaffe will be paid by all 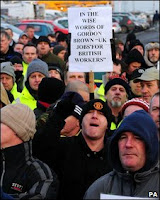 I’ve always liked Gordon Brown and at this stage I think he’ll win the next UK election despite the Tory lead in the polls. Brown is reliable and trustworthy, there’s nothing flash about him, he’s solid and believable. That’s why I believe he’s made a mistake calling for British jobs should be given to British workers. What exactly does that mean? Where stand Irish people who may have spent more of their lives in Britain than here in Ireland?
This week has seen the anti upped considerably by an unofficial strike at an oil refinery in opposition to a contract being awarded to Portuguese and Italian companies. Sympathy strikes have spread elsewhere around the country. Gordon’s soundbyte is thrown back at him. Its wrong to say you can give jobs to one nationality only in an economy. EU legislation applies to all EU nationals and all are equal before the law. The British economy benefits hugely from foreign investment particularly in the city. We can all wave the national flag and as Larkin pointed out you cannot eat a flag. The solution to a problem with European legislation lies in Brussels so lobby to change the policy as set out in the EC. Not for one minute would I argue that the focus of Europe has swung away from the citizen to the corporation and that’s because the right in Europe have rolled out the liberal free market model at the expense of the previous social model. This has happened when the Socialist Group weakened in successive EU elections. 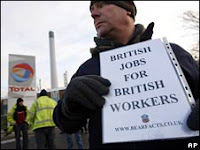 I wonder how long it will take until some gombeen man politician in Ireland parrots an Irish version of this soundbyte. Pointing the finger at high levels of job losses in construction and doing the back of the envelope maths to show that if the Eastern Europe building workers would kindly go away Irish workers would replace them. I’ve always held the view that Ireland will see some Eastern Europeans return anyway and a significant number stay as their families and children settle and intermarry with Irish. The temptation to pander to low base instinct will surely get the better of someone in the run in tot his election as it did to FF’s Noel O’Flynn and FG’s Joe O’Callaghan in the 2002 Election. If this view was around 25 years ago no Irish emigrant would have survived in London. It's time to think that if countries acting together cannot deal with the international aspect of the credit crunch what chance has a small state? If workers united cannot resolve the problem how will workers set against one another because of nationality ever get this sorted out?
Posted by Unknown at 11:59 PM

I was listening to George Galloway on Talksport on Saturday night and he was goading people in to joining the striking workers. He interviewed Arthur Scargill about it.

How can these people simply expect non British workers to go back now that things have gotten tough. It's ludicrous. But what is even more ludicrous is that people have been allowed to run with this idea unchallenged.

If people want to see how important non national workers are to the British economy then all non national workers should be given the day off and then the British will see that their offices aren't being cleaned, their restaurants are closed, their children being cared for by au pairs and their financial services sector completely and utterly destroyed because the truth of the matter is that the strongest players in the financial services sector are not British.

I'm just waiting for an Irish idiot to jump on the same bandwagon. No doubt he will be from the same party that are guiding the sleigh that is bringing this economy downhill or it'll be a shinner.

Having worked in London for four years and witnessed first hand the tapestry of cultures that makes it the greatest city in the world I think that it would be a shame to go back to post second world war attitudes. It is such a backward attitude, it's as if Operation Windrush never happened.