Slowly the grenade lobbed in at the end of the budget is going off. NAMA was created to get the Galway Tent brigade off the hook. Lets tease the mess out a little; Banker loans speculator money to buy a site. The higher the loan, the higher commission paid to banker. Site fails to progress, speculator is due to meet payments so bank hits the wall as he’s got no cash. In steps the state to set up NAMA. NAMA will use tax payers cash. The less they pay the speculator for the devalued asset, the more the bank loses on its loan and the more the pressure on the banks! The more NAMA pays the speculator the more the tax payer is hit up to €80 Billion according to Brian Lenihan.

So impaired loans or structural deficit are two sides of the one coin. I don’t hold with the view that every other country has the same problem. They don’t. The problems are significantly less in France, Belgium, Sweden, Denmark, interestingly countries that spend a lot on social infrastructure. 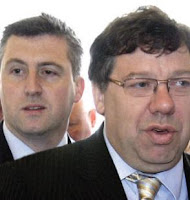 Which brings me back to something that many people are starting to ask me; why are Fianna Fail attached at the hip to speculators and bankers? It seems a case of buy one Fianna Fail councillor and get a commercial development free! They used to say the sun doesn’t set on the British Empire, it seems as of yesterday that the sun has just come up on an Irish tax payer sponsored property empire. This empire stretches further than the British Empire ever stretched, from Dubai to Dungannon, from Florida to Finaghy, we’ve bought the lot, but for how much extra? €30 Billion of what we’ve taken on is outside the jurisdiction.
Why are we propping up developers elsewhere? What is stopping a developer with a limited liability or indeed a number of them acting together, disposing of an asset to NAMA, then effectively choreographing the bidding to avoid competition and re-secure the same asset at a price less than that originally paid by NAMA? If crony capitalism was an Olympic sport, Ireland would win the team medal every time!
Emperor Lenihan like his boss as portrayed by Conor Casby has no clothes. The international banks have downgraded the credit rating of Irish banks who let the cowboys loose in the first place. David McWilliams predicted a number of months ago that the state would have to nationalise all the banks. I’ve concluded it’s got to go that way simply to protect what else is left of our economy against collapse. Nationalise the lot, take the speculators land both here and abroad. There’s a hit on the way anyway for the likes of me in the PAYE sector who’ve always been stuck with shouldering the cost of this state at every turn, would it make me feel better if manners was put by the market on the slump coalition of Fianna Fail, Speculators and bankers? Figure that one out yourself!
Posted by Unknown at 11:32 PM

This is interesting
"Why are we propping up developers elsewhere? What is stopping a developer with a limited liability or indeed a number of them acting together, disposing of an asset to NAMA, then effectively choreographing the bidding to avoid competition and re-secure the same asset at a price less than that originally paid by NAMA? If crony capitalism was an Olympic sport, Ireland would win the team medal every time!"
Joe, I never thought about it this way but you are Right

NAMA's sponsors like to confuse taxpayers by using big opaque numbers such as the ninety billion euro they plan to scam from taxpayers 'to save the economy'. That's €60,000 of extra taxes per worker (2011 full-time headcount equivalent). Such money would be better invested in high value intellectual property.

Its more useful to look at an example of just one site buried inside that €90 Billion zombie banking number. According to honest DDDA-Anglo-Irish-Bank the Irish Glass Bottle speculation-site in Ringsend has an alleged book value of €450 million. The site's real value is between zero and €45 million at most. However when the DDDA Autocracy hands out the planning permission for the future-slum to its co-conspirators, sorry co-investors, the Autocracy will declare the site's value is €299 million.

This means the honest NAMA gentlemen can diddle the taxpayers by paying 'a robust 66.6%' or 'only' €199 million for the site. The false book-keeping balance of €251 million is diddled from the taxpayers in the "systemic Anglo-Irish Bank" scam of September 2008.http://galwaytent.blogspot.com/2009/04/nama-gearing-up-for-ddda-scheming.html