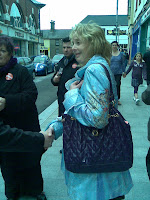 Today the election campaign turned a corner. Nominations closed at noon. I was the first candidate to lodge my nomination papers last Monday as I’d to rush back to class ahead of my 4 Labour colleagues lodging their papers! The response this week continues to be positive to our campaign. We’ve covered the north end of town and each evening voters tell us how they’re glad its not FF or the Greens who’re calling. The only issue is the collapse in the economy resulting from FF & the PD’s mismanagement and the Greens now riding shotgun on board the Cowen express. All other issues are secondary. Fine Gael are behaving like the cat that’s got the cream but we’ll see about that in 3 weeks time.

In Wexford Borough there are 23 candidates declared for 12 seats, 5 Labour, 4 FF, 4 FG, 2 SF, a Green and 7 independents. In 2004 there was just 19 candidates with a quota of 535 votes from a turn-out of just 50% in the urban area. As someone pointed out to me, e-voting machines provided for just 15 candidates, what would have happened in the event of the number of candidates exceeding the number of options on the machine? There’s plenty of choice and I think that the increase in candidate number will bring out extra voters. There are significant changes since 2004. 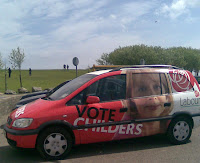 The boundary of the council has been increased to include all lands inside the by-pass and about 1 mile north of Wexford Bridge towards Ardcavan. The functional area of the council provides for 20,000 people with an electorate of 15,000. Wexford is quite unique in that there are no wards and the entire town is 12 seater constituency. If a similar turn out of 50% occurs in 2009 the quota will be about 580. I expect a higher turn-out than in 2004. I think the quota will be close to 600 if not greater. This may surprise some of the candidates. Heretofore candidates relied on family networks to deliver votes but as family size has dropped and quota climbs the old way of winning may not be the sure-fire winner it once was.
Today Nessa Childers was back in town. Poor weather resulted in less people walking the streets so Nessa met with St Jospeh’s Community Youth Group before canvassing in Tesco and Pettits Supervalu. Nessa got a very positive response from voters and I think the Wexford welcome put a spring in her step as she returned to Dublin and further positive polls showing that she could win a seat in the European Parliament. However lets remember no one has voted yet, there’s still 3 weeks to go. If a week is a long time in politics what does that make 3 weeks? It’s time to get the heads down and work in for 3 more weeks. The election is only warming up and doesn’t end until June 5th at 10 PM. It’s only then we can count the votes not now! 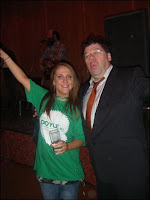 Brian Cowen slipped into town to throw his weight behind the Fianna Fail campaign. Senator McDonald was visible in support of her man and Fianna Fail’s Bobby O’Neill marshalled his supporters as shops closed on Main St to escort the Taoiseach past the few curious on-lookers catching a glimpse of the Taoiseach on the day satisfaction with his government slumped to 10%. Conspicuous in their absence were many faces I’d associate with Fianna Fail in Wexford however I’m sure there are other reasons for that other than the fact that Fianna Fail’s local election campaign in Wexford is in a shambles. 2 FF candidates have no posters up yet and one is reported to be outside the state for the next week.
Posted by Unknown at 12:49 AM