Coir principles, rotten to the core

It’s about 20 years since I first came across one of the founding fathers of Youth Defence. He is from Blanchardstown and he’s a decent guy. We’d often debated politics, he a strong but critical FF supporter, I on the other hand, backed Dick Spring. He embraced Youth Defence with vigour about the time that Charlie Haughey lost out to Reynolds and the horrific events of the X case unfolded. On the other side of the fence, I had huge sympathy for the child at the centre of the case and felt it was wrong that a 12 year old rape victim be put through the additional trauma of child birth. My acquaintance was opposed to allowing the girl terminate her pregnancy and threw himself full blooded into Youth Defence. All abortion was in his view wrong, all women who took that choice were as much murderers as the medical staff who performed terminations.
The 12 months from the Autumn of 1991 to late 1992 was a very dramatic year. It saw enormous scandals of all sorts rock the Irish establishment; Greencore, Beef Tribunal, Telecom Eireann, Bishop Casey, Ben Dunne, culminating in the hammering of Fianna Fail by Labour in the General Election. Middle class folk wanting to hold onto old certainties found the going tough and when their kids came home from the latin mass they joined Youth Defence and took to militant campaigning like ducks to water. Nothing was too far to get the type of publicity they craved. Picketing Brendan Howlin’s family home, opposing access to contraception, regular spats with the Irish Family Planning Association on IUD’s quickly gave them the reputation of the Religious Right’s wild child.
Except many who were genuinely religious had doubts too, the attachment of some to quasi religious conservatism of the 1930’s was noticeably out of step with the average Catholic. Many YD members were devout catholics who preferred the Pre Vatican 2 Catholic church to the doctrine of the modern Catholic Church. Psychiatrist Patricia Casey was deeply disturbed at the association of Youth Defence with the Pro-Life movement. Youth Defence grew quickly but in so doing damaged their name.

Needless to say, YD split not before the divorce referendum with the establishment of “No Divorce Campaign” with their infamous Hello Divorce Goodbye Daddy posters, “HLI” and “Family and Life” all horse from the YD stable. Youth Defence learned that for each campaign they needed to re-morph under a new title drawing the public away from the antics of Youth Defence. I recall a Canadian priest touring Ireland with what he claimed to be an aborted foetus in a jar as a publicity stunt.
So “No To Nice” evolved into Coir. When attacked by FF over the link to YD, Coir described the attack as dirty politics. But YD and Coir share the same office in Capel St! All campaigns run on the same basic YD formula of half truth and naive and exaggerated claims from Niamh that a hidden section of a treaty would bring in abortion by the back door as part of some European conspiracy, all funded from out of thin air. 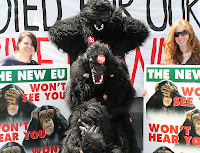 I’ve regularly heard politicians ask questions as to where individuals with criminal records known to be claiming social welfare get the resources to maintain their lifestyle. Similarly I wonder where does Coir and similar organisations get the funds to run their campaigns. Already the posters are up so perhaps the buckets of dollars have arrived from the US. Ten years ago Scully raised nearly £500 K for his own outfit Pro Life Movement Ltd.
Posters such as the one claiming that the signatories of the 1916 would oppose the Lisbon Treaty don’t come cheap. James Connolly was central to that rebellion; he was an internationalist who believed in women’s rights. A key part of the proclamation states The Republic guarantees religious and civil liberty, equal rights and equal opportunities to all its citizens, and declares its resolve to pursue the happiness and prosperity of the whole nation and of all its parts, cherishing all the children of the nation equally.
Presumably the boys and girls of Coir haven’t read the Charter of Fundamental Rights that is included in the Treaty of Lisbon. The charter extends every Irish citizen rights significantly; the right to join a union, new rights in education, the right to travel (something YD opposed in 1992), rights to asylum, children’s rights to name a few. Coir (or Youth Defence as I remember it) is opposed to Lisbon not because they of the maths of QMV decision making or any interest in neutrality (their class don’t do the fighting but usually get working class to do it for them), but because it makes a right wing agenda less likely. The facts are that Coir opposes the extension of the very liberties in the 1916 proclamation that they are now hypocritically claiming to protect.
Coir will use any referendum to obstruct anything that impacts on their agenda of a 1950’s Ireland. Even if it has no connection as is the case with abortion and Lisbon, they’ll warp the logic and add a half truth to an obfuscation and hey presto, they’ll get the referendum commission to spend tax payers cash spinning their line for them.
They’ve realised that by playing games with the constitution they can achieve much more than seeking a mandate on behalf of their electorate, but here’s a challenge to them, why not seek a mandate at the next General or local election, indeed I’d relish a debate with any Coir Candidate in Wexford in the next 5 years. Any time. I’d enjoy picking up where myself and my old acquaintance left off almost 20 years ago, my latin isn’t as it was but I’ll take Coir/YD on!
Posted by Unknown at 7:20 PM

I'm still undecided but have no time for Coir/YD. I was reading Micheal Martin on them yesterday.

I'm not sure what the FF strategy is for this referendum, but he seems to be the only one doing anything positive.

Are they still on their holidays, or are they just hiding out?

No, Joe, no means no, as the IRSP put it.
Labor is wrong to campaign with the bourgeois for a yes vote.

My reason for voting NO.

This is an extract (page 3) from The Lisbon Treaty, Your Extended Guide published by The Referendum Commission.

"The European Council has also issued a solemn declaration on social issues including workers' rights. This is a political statement and is not legally binding."

I'm voting no because of immigration. Article 15.1 of the Charter of Fundamental Rights allows asylum-seekers to work. The UK has an optout, meaning Ireland and Malta will be the only English-speaking EU states to allow them to work. The result will be many UK-resident asylum-seekers travelling to Ireland. In a recession this is unacceptable. I am also opposed to Paragraph 7 of the referendum legislation which allows the government to take us into the Schengen agreement, abolishing passport checks on travellers into the state at ports and airports who travel here from 25 countries.

Lisbon won't help the economy. Since Spain voted yes, unemployment has doubled to 18%. I also find it undemocratic to foist this on the French and Dutch peoples who voted no.

Hi Future Taoiseach,
Lets not confuse immigration with asylum seakers they're separate matters. Numbers of asylum seekers have dropped.
I'm old enough to remember when this state did not provide for 3rd level college grants and when people like me got through college by working each Summer on Germany.
Fortunately the Germans didn't take the same attitude that many Irish now take to thise who come to work here.
I would love to see Ireland entering Schengen however as you know it won't be happeneing because the amendment in the UK parlaiment recently to keep the common travel zone. As you well know the Lisbon Treaty allows us to ratify Schengen but does not compell us to do so otherwise the UK decision on the CTZ would have been superflous as they have already ratified Lisbon.
You'll really have to try alot harder if you want to live up to your monkier!!