ICTU spell it out to FF & the Greens 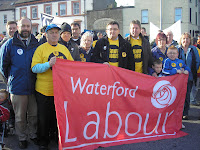 The ICTU rally in opposition to cuts in government spending in Waterford saw about 8,000 union members from the south east march in fine dry weather to let the government now exactly how they feel. Nationally almost 80,000 took to the streets to put Brian Cowen and Brian Lenihan on notice that they expect the government to pursue those who made most during the boom years to pay up when it comes to finding the money to keep public services going.

It’s unfair to describe the protest as a public sector protest about avoiding pay cuts. Notable in attendance were community workers from FAB in Wexford opposed to cuts in funding to the CDP budgets.
FAB is funded under the RAPID scheme and does valuable work within estates where unemployment is high and there is a huge reliance on social welfare and funding to maintain the community. These women were there because they know that funding cuts will set them back years while those who have made a fortune in this country will still hold on to their cash oblivious of the real need in their country. But it wasn’t just about workers it was about retired workers too, some of whom I met and spoke to. 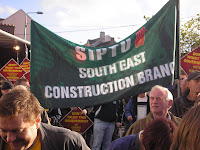 I was delighted to meet so many of my Labour colleagues from around the region, Cllrs Denis Landy, Seamus Ryan and Tomás Walsh all marched behind the Labour banner. My ASTI colleagues were out in force as were INTO, IMPACT, UNITE, TUI, INO and of course SIPTU. I was delighted to see the entire Wexford SIPTU office at the rally afterwards at The Glen. Pleased also to see Rory, fellow Wexford blogger flying the Wexford flag and the red flag from the same pole. 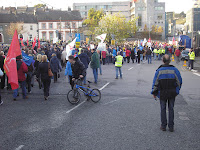 Led by a band from The Glen, the march went along the Quays and back via Ballybricken. There was a strong show of firemen and ambulance workers to underpin the depth of feeling in the 24/7 group of workers. As I passed the garda station at Ballybricken I thought for one moment I saw the “Super” give us the clenched fist from his 3rd floor office! There was a clear message from the platform from ICTU, Mayor Halligan of Waterford and other union speakers that ordinary workers are being put to the pin of their collar and didn’t deserve what was being done to them. Those who run Irish society were setting worker against worker. 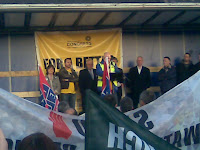 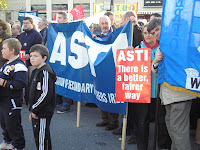 Teachers have an unpalatable choice, oppose pay cuts and the government will sack your younger teaching colleagues and your working conditions will deteriorate. Accept a pay cut and the very colleague who you feel should keep their job will find the mortgage payments a difficulty. That’s the reality, just 2 years after being told by Bertie Ahern that anyone who was sceptical about the boom should commit suicide. Some Republic!
Posted by Unknown at 11:14 PM

Nice report Joe, good to have met you in person. Keep up the protests!

The turnout was fantastic and far beyond what i imagined. It as great to see people standing up and saying no to the present governments approach to dealing with the crisis that they largely created.