We are where we were left! 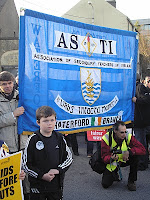 I’m tired of clichés being trotted out as a glass ceiling to box in disenchantment. We are where we are ranks as one of the worst offenders! In fact we are where we were left or more likely abandoned. While most of us face in to a windy or wet Easter spare a thought for Sean Fitzpatrick who has a pad in Marbela that he can get away to free gratis courtesy of a FF appointment to the board of Aer Lingus, who this week announced a record loss of €80M.
If that doesn’t move you then think of how David Drumm feels as he cowers behind his front door as Charlie Bird gapes in his letter box innocently asking him “Why are you ducking down?” Fair play to Charlie, I know his time is almost up as Washington correspondent but thanks for the priceless 90 second clip where he tracked down Drumm to his New England trophy home. Drumm owes his former employer Anglo Irish Bank over €8M (and it seems I and other tax payers are now liable for over €6m) and he is where he is and I’m where he left me!

Make no mistake about international opinion. Just because the international movers and shakers in the financial world approve of the overall figures coming out of Merrion St doesn’t mean there’s another way of arriving at the same figures. All the international lenders want from us is money, where it comes from they’re not bothered. So lets not worry too much about the FF and Green line that international confidence is being restored in the economy. What really matters is the confidence of the ordinary person to spend. There’s little indication that the spending will resume and the reason is that wage cuts and unemployment mean that there is very little spare money.
That’s why the agreement reached between the government and the public service unions will fail. It did nothing about restoring wage cuts. 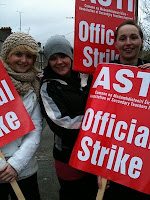 Indeed the suggestion that less workers will do more work and in return pay cuts will be held back till 2014 shows a lack of understanding of how badly hit many particularly low paid public sector workers are. I’m not hugely surprised, last year I met a woman who worked in Social welfare who said that she’d be better off claiming rather than administering unemployment payments. Here's where the 2 threads plait together. Many public sector workers are fed up seeeing there wages cut by a government that has no problem finding as much money as will be needed to bail out the bankers
In my own case, to propose that teachers work an extra hour is a kite being flown. The suggestion that schools would open for another hour is wide of the mark. Given synchronisation of school year and contracts for school buses what it really means is an extra class contact hour in the week for each teacher. That would mean less time to do the preparatory work for practicals, less time for my post of responsibility but more importantly less jobs for teachers. 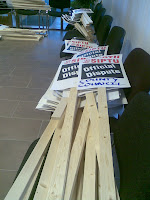 The likely alternative to accepting this deal is another pay cut at the end of the year. The follow on response will likely be non co-operation with inspection or Whole School Evaluation and a retaliatory further pay cut by Cowen and Gormley. What happens in my area will happen in others. Its very depressing for those of us who work in the public sector. To be fair to Cowen and Lenihan they’re doing what you’d expect them to do so where is the leadership from the union side? We need a vision to oppose the right wing orthodoxy of "There is no alternative" or "We are where we are" school of economics. I'm pleased my union executive have given this deal a thumbs down, I understand that each union is autonomous in accepting or rejecting. Its not enough to sit back and allow the government agenda to go unchallenged.
If that happens the net outcome of the Celtic Tiger will be a race to the bottom in every sector and the starting gun has been fired in the sack race.
Posted by Unknown at 11:23 PM