Yawn Blah Blah Mrs Gilmore has a past! 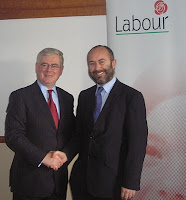 A few weeks ago I blogged on how the right wing Irish media was tut tuting about Eamon Gilmore’s past political life. A fortnight on from being portrayed as a fellower traveller of Official Sinn Fein in the 70’s he’s now being effectively compared to the Dunner!

Its going to get a lot tougher as the Indo group dredge the barrel on Eamon Gilmore’s personal life. Those on the inside track won’t give up easily. Today the shock horror is that Eamon’s wife had the cheek to sell land that was left to her by her mother at the request of the Board of Management of the local school where she grew up in rural Galway to provide a site for a new school building over 4 years ago. Eamon’s wife had no intention of utilising the land and she received €525,000, paid her tax after the land was independently valuated and a price agreed.
Eamon had no role in the matter but hey! Don’t let the facts get in the way of a good story! A woman with her own money? Surely that can't be alowed?

The Dunner on the other hand who regularly is highlighted by the Sunday Independent as an icon of how modern Ireland does things different. He asks his spouse to pick a number between 0 and their house number and then adds that to the €200M baseline he’d agreed with an agent. No need to bother about valuation or where the money is coming from. Sure Ireland will pick up the slack on that one.

So lets look at the “story”. Was the price per acre at the time in line with the market price for such land? Could the site have realised more if it had been sold off for one off housing sites and zoned at low density? The answer to both questions is Yes! Has Eamon Gilmore benefited from the transaction? Is there a suggestion of anything untoward? The answer to both questions is No!

What the implication is, is that Eamon Gilmore’s wife should not have sold the land because of who her husband was or if she did she should have sold it for next to nothing because of her husband’s politics. It’s unlikely that she was going to return to farm the land.
Fionan Sheehan accused Eamon Gilmore of a double standard comparing him to a developer on Tonight with Vincent Browne. Is the sale of 2 acres of land for a school the same thing as speculating on the price of land and regulating its supply to the market in order to drive prices upward? Because that’s what Sheehan effectively compared the sale to?
While I’m at it, if Fionan suggests that Eamon Gilmore should take responsiblity for his wife’s affairs, shouldn’t Fionan at least admit on air that his own spouse is a FF ministerial advisor and a defeated FF local election candidate?

The facts of the matter are that Kilimor National School was in need of replacement for many a long year. You’d be along time waiting to speculate on a site in Kilimor before the Sean Dunne’s of this world would roll into town with a Section 23 in their back pocket to kick start the construction sector even though it at least had more infrastructure such as schools than some of locations where all that’s left are ghost. A month ago the FG golf story was an attempt to undermine Enda Kenny and that one didn’t work either although some in FG rose to it because it suited their agenda to undermine their leader. For what its worth I believe Kenny is a decent and straight man and so too is Gilmore.

Eamon Gilmore is being worked over because he’s opposing the present consensus between government, bankers, developers and media. Believe me they’ll be back when this stunt doesn’t work.
Posted by Unknown at 12:49 AM

He's a sticky who left for the big govenment job in the Free State. Everybody knows that.

Even today on the radio I was listening to blueshirts talking about how they are going to 'lead' the next government.

Who the hell is going to be propping them up and taking all the flak for them?

And for what? Some lousy money and a goverment car. (I presume all the Labour front bench are not going to go into goverment for egotistical reasons).

I always say never take the electorate for granted. There is no election called, no votes have been cast and no result. Sounds to me that they're jumping their fences too early