Ireland of the Welcomes! 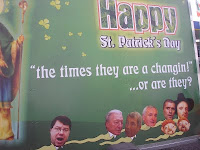 Life in Ireland is resembling a mood swing. From depression to delight and all points in between. The visit last week of Queen Elizabeth was analysed to the nth degree rightly from the perspective of how we can build a relationship with our nearest neighbour into the future. Interestingly the language used is fundamentally different. No more mentions of “the mainland”, No fake Hollywood shamroguery or leprechauns. It’s been all quite civilised as Ireland benefits from positive exposure on the international stage. Europa League Final and Queen Elizabeth. It’s reported that the number of enquiries about Ireland as a tourist destination has increased greatly.

There’s more to come as Barak Obama will share the stage with the European Rugby Champions Leinster. Given the low value of the Euro against the dollar and sterling and the reductions in price in Ireland the tourist industry will get a boost. Nowhere better able to capitalise than Wexford. I was at the launch of the new portal website for Wexford a few weeks ago in the Opera House and it strikes me that it is up and running a the right time. www.wexford.ie with its tourism theme of “So Old So New” combines business tourism, local business and local administration. Wexford does have an advantage in promoting its tourist product as there are 3 images that the county has nationally; beaches, strawberries and Opera. Providing a strong internet presence will only help.

My own comments at the launch was that few counties had done what we’d done. Local authorities get stick often but in this case Wexford County Council who sponsored the site are due credit. Given Wexford’s location and all it has to offer it’s the first port of call through Rosslare. The need to develop transport links out of Rosslare is outside the local authorities control. During the volcanic ash crisis Bus Eireann objected to the temporary extension of a license for Wexford Bus to allow the collection of foot passengers at Rosslare. If state companies want a turf war rather than to provide a service then the state is missing the point. As once again a threat of a new volcanic ash cloud hangs over aviation Rosslare could once more play an important role. So where’s the railway connection to Waterford and beyond?

I hope that the forthcoming tourist season see more people come to Wexford to see Johnstown Castle, JFK Arboretum, The Irish National Heritage Folk Park, the 1798 Centre and the re-opened museum in Enniscorthy which by all accounts is wonderful. And don’t forget the Opera, and the beaches and of course the strawberries!
Lots to come to, Lots to see!
Posted by Unknown at 11:39 PM