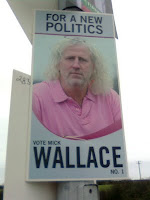 Its only months since the General Election. Few new TDs have made an impact like Mick Wallace. Mick regards himself as a national politician who said that issues such as hospitals are not for him. Mick’s flamboyant straight talking style has now caught him out. Sitting along one TD who’s a hedge fund manager and another who cuts turf, they cut straight to the point when discussing a FG TD’s attire during a Dail vote.

I’ve no problem with his clothing and whatever he want’s to wear. But I draw the line at his double standards. Today’s papers are full of the group sexism the three men engaged in. He’s right when he says today that he’s bang out of order. Another issue he’s bang out of order on his concern for the future of JLC’s and the Sunday premium.
Last week in the Dail he said “I employ 52 people in the restaurant industry and can assure the House that JLC rates are not my problem. I have other problems in that the position has been very difficult for restaurants in the past couple of years”.
Mick went on “An employer cannot complain about Sundays. A Deputy on the other side of the House claimed that only Friday, Saturday and Sunday are busy days in this country. That is not true. I can tell her that Wednesday, Thursday, Friday and Saturday are more lucrative days than Sunday in Dublin and Wexford.”

My eye is drawn to these remarks as its only about a year since a local paper in Wexford reported he was instructed to make settlements to his restaurant workers for not paying Sunday premiums under the exact same JLC agreements that he says he now has no problem with! While Mick Wallace may not have a problem now with the JLC rates, a year ago he was up to his neck in it and it ended up at an employment appeals tribunal after a worker who insisted on being paid these was sacked!

It’s not so much a matter of the clothes he wears but the reality that on this one issue of protecting low paid workers, Emperor Mick Wallace hasn’t a stitch on him! His election posters said that he stood for new politics. I’m not so sure anymore about that. There’s the element of do as I say but not as I do on this one.

If Mick had also paid his sub contractors there is the chance that there’d still be enough revenue to support the SNA’s that work in my classroom? In the past I’ve sympathised with Mick Wallace when his companies were placed in receivership. Mick has to understand that sympathy is not a one way street and soon people will run out of time for him. Even those on low pay have their limits.
Posted by Unknown at 6:25 PM