We’re on the one road 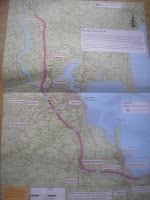 Not in my years has there been so much anticipation. The decision of the proposed route of the new Oilgate to Rosslare N11 was finally announced today to councillors. Originally there were 8 different routes listed as possible. Now it is down to one preferred option. I know that most people will scratch their heads and wonder where will the money and traffic come for this project given the mantra that we are where we are!
The proposed route bypasses Oilgate to the east and rejoins the N11 until Newcastle where it will branch off west of Ferrycarrig Bridge before rejoining the alignment a the Barntown Roundabout. There is a new bridge proposed over the Slaney near the Irish National Heritage Park. Next it continues to Drinagh along the present bypass and curves away before the Drinagh roundabout to follow the course of the already agreed routé of the Wexford Rosslare road provided for about 10 years ago. In comparison to what could have been its minimal in its delineation,

Lets deal with that one about money. The criticism of the M50 roundabouts at Red Cow intersection was that it was designed and built when usege was low and that the time to do the spade work on any infrastructural expansion in a better economic environment in the future is now. The second point that makes it sound more realistic is that the project can be built bit by bit as there are several intersections with the existing national primary roads where the routes can re-join.
My initial fear was that the preferred route would take the road away from Wexford town in the direction of the N25 with the consequent bypassing of the town and the likely bypassing of New Ross, I reckoned Dungarvan would be the first town that the tourist would meet on the way to Kerry. That fear has come to nought. I’d hate to think of Wexford as being one more sign post on the way to somewhere else. Now I’m reassured.
A word of the actual preferred route. The maps provide for a 300M strip wide within which just 100M width of land will be ultimately used. If you look at the map and see your house in the line of the road it doesn’t necessarily meant that the road will go through your house. Indeed it will probably give the planers the leeway to avoid knocking any house and incurring extra cost. I know that when people look at the Whitford House and Clonard Village will see the land in the 300M zone however there is no certainty that there will be an intersection here, My view is that there will be just 2 intersections, one at Drinagh and another at Barntown with a linking distributor road collecting local traffic to these junctions.

It will take many years before the design and planning permission stages are over. There will be an oral hearing and the matter will go to An Bord Pleanála direct as it is critical infrastructure. It could be 20 years before it is built and given that its 10 years since the preferred route of the Enniscorthy bypass was agreed and still land hasn’t been purchased then it’s not a case of holding ones breath. Not so much a giant step today but a baby step but a step it was!
he
Posted by Unknown at 3:58 PM