Campaign notes from the south east 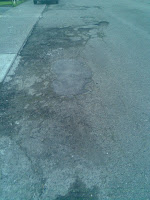 With less than 2 weeks to go, and from my point of view 50 weeks gone the finishing post is within sight. There’s been a good response to our campaign not just in Wexford but more importantly in Enniscorthy. It’s been 10 years since Labour last held a seat there. Local newspapers are suggesting that Labour will gain a seat there at the expense of Fianna Fail. Pat Cody and Francis O’Connor are our candidates there and they are doing a really good job at shaking up politics there. That will be significant as it will effectively change the balance of power on the council in the backyard of a former Junior Minister.
There are subtle changes since 2007. There are more people at home by day, less out, working more at home. One phenomenon that I remember from the 2007 General Election was the number of houses where there were builders boots outside the front door. I remember that if you saw just dirt on the doorstep you could conclude that the builders were out. I commented on that at the time to Brendan Howlin and soon we watched for houses with Polsat satellite dishes. Further evidence of a builders who probably had no vote and were non national. A sign of the times we’re in is that there’s much less sight of boots at the door now.
I debated on South East Radio on Friday morning with Ger Walsh Independent, Barbara Anne Murphy & Martin Murphy (FF) and Anna Fenlon (FG). It was a very civilised affair as each candidate was asked about their own area. In reality the issues in an urban area like Wexford can be significantly different to Bunclody or Campile and their rural hinterland. We all took up our party’s view on the economy. Ger Walsh surprised me by saying he was opposed to bank nationalisation. As someone who had previously spent some time in the Labour Party where nationalisation would be favoured I reflected on how far he moved in political terms.
National issues are raising themselves on the doorstep but there are local issues like potholes, schools or as may surface soon Wexford General Hospital. It seems that the HSE is planning to limit out of hours A&E cover after 12 midnight. This would require people needing emergency medical attention to go to either Loughlinstown or Waterford both hospitals with their own catchments and populations to cover. So now under the Greens and Fianna Fail you can queue 24 hours around the clock in a hospital. I’m aghast that this is a runner especially at election time, surely anyone with a political bone in their body would know not to propose this in the middle of an election.
There’s nothing like a diversion from politics especially in the middle of an election and nothing better than a family celebration. Sunday sees our daughter’s First Communion. I’ve taken a break over the week-end from the campaign so as to prepare for it. Once its over its back to work on the stump. Lets go!
Posted by Unknown at 1:33 AM

Great reading, Joe and all the best for the campaign. Enjoy the Communion! PS -fix for post election only! - the Ustream link covers the text of your first post (in Firefox anyway).