The final countdown to polling day.

It’s the kiss of death for any candidate and last week I was given it. A local newspaper described me as being unpopular with my colleagues but virtually certain to be re-elected. It’s like the vote of confidence by the board in the soccer manager. 5 years ago the same paper was luke warm about me at this stage.
I don’t mind the bit about being unpopular with colleague councillors, I’m not clubbable and never set myself out to be. If you do, you can sometimes compromise yourself. I rarely socialise with other councillors after meetings because I prefer to get home and get the children’s school lunches ready. When you’ve a young family you have to have priorities. What actually hurts me is the “virtually certain” bit. That can easily make for complacency among voters and personally. Otherwise I think the profile was fair, an editor has a hard job. He’s got to be objective all the time. A journalist who deals with councillors on a regular basis develops a relationship. Not so the editor. Rightly Editors and politicians shouldn’t be friends. I’ve never met the editor of this paper, I know Tom Mooney from the opposition Echo to see and in 5 years may have spoken to him twice, never about his paper. I’ve found the local papers to be in the round fair. If they’ve given you a sting one week they may well make it up to you another time. 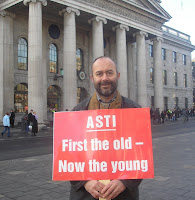 When you compare the relationships in Wexford to that between Aonghus Faning and Bertie Ahern there’s no comparison. Faning has lambasted FF but comes on side for elections to ensure his stable of writers push the middle class buttons to deliver for FF. He’s a little like a mongrel ignoring his owner until he knows the bowl is going to be filled with dogfood. It’s why I don’t buy the Sunday Independent. I admire Ryan Tubridy for saying he doesn’t read it also. A mixture of opinion with news is attractive but damages the value of the writing as it elevates the writer to the role of a player in the news. Should this be allowed? Ryan’s reward for being candid was to get it on the neck the following Sunday!
Since I started this blog I felt it was about opinion based on facts that were established elsewhere. My political own motives are apparent and my agenda will either be endorsed or rejected on Friday . That’s what makes the real poll different to an opinion piece that I’m virtually certain of anything. The real rather than the virtual world means I account to the public ultimately not to an Editor.
Posted by Unknown at 12:20 PM