Labour has no policies?

The rise of Labour in public opinion polls has seen the focus of Fianna Fail and Fine Gael’s fire power turn on Labour Party policy. I’ve always read the polls with the margin of error in mind. What that means is that FF is clearly in 3rd place now but that FG is where it always is, ahead of Labour who is closing the gap and for some time now I’ve figured little else was happening outside that 2 years off polling day.

What intrigues me most however is that the spin of those parties now under threat from Labour is the same; Labour has no policies. After giving a bit of thought on this one and the last 2 years I’ve concluded that FF & FG are right! From the FF point of view the last boom was based on property and construction and we’ve no policy to re-inflate the property market unlike the NAMA plan of Brian Lenihan. Lenihan will in time be seen for what he is, conning the public into reviving a property bubble that has already burst. The verdict on Labour having policy to revive that is refreshingly negative. There’s none whatsoever! 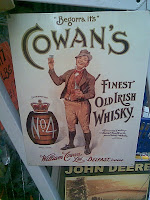 When FG say we’ve no policy what they mean is that after they’ve pinched Labour policies on Earn and learn, Universal Heath Insurance, gap year and pre-school education as ways to reduce unemployment there is not too much left for Labour to trumpet! The reality is that FF & FG will revive profits for those who have survived this far but have they any idea how to bring down unemployment? That’s the yard stick by which most people will judge the end of the recession.
The clincher was the IMF report this week into the Irish economy. It said that unemployment will remain high, well above the EU average for 5 more years. The IMF is no bastion of radical socialism but its report pinpoints one of the failings of the current policy entente between FF & FG. They don’t have any ideas how to reduce unemployment and to provide well paid jobs. Profits in industry doesn’t mean that jobs will be created.

All that they can say is that they can try to revive the bubble in property by shoring up the banks. Thence the bank guarantee scheme, the good bank and bad bank scheme and opposition to bank nationalisation. For 2 years the slump in economic growth has cut the economy back to the bone.
Where is the scheme to revive loans to Small and medium size enterprises. This sector has the potential to deliver more jobs that would be sustainable than those in the construction sector, so why hang about on the credit line from banks? The bank revival plan is all about reviving share price and profits not employment and how the revival of the economy will be judged is by the eradication of unemployment. So far we’re as far off that as ever. To put the record straight someone told me that Labour has launched more policy initiatives than FF & FG together, over 140!

Lest FF & FG forget Eamon Gilmore said all this as recently as April 2010; “As part of our jobs strategy, Labour will take 2 billion euro from the Pension Reserve Fund and establish a Strategic Investment Bank that will put €20billion Euro to work in our economy. The new Bank will have a joined up approach, providing finance for innovative companies and small firms, that are the backbone of this economy, but also helping to finance the infrastructure that they need to succeed.
Investment in networks like renewable energy, next generation communications, smart grids. Creating the environment for a new wave of Irish companies, that can seize the opportunities of a new world economy.
In our first Budget, Labour will establish a dedicated Jobs Fund, to finance measures that create and support employment; Such as a PRSI break for companies that create new jobs.
Such as more direct support to firms for research and marketing development. Moving ahead with projects such as school buildings, that are ready to go. Driving ahead our plan to promote building insulation so we can create jobs, lower fuel bills and cut emissions at the same time.”
So what bit of 140 does FF and FG have difficulty getting their heads around?
Posted by Unknown at 12:51 AM