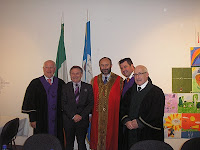 It’s a great honour and its something that is hugely important to me. Being first citizen is the highest office you can get in Wexford politics. Lets be straight up it’s the best job in Wexford politics and the oldest. The County Council is certainly better resourced and has a wider remit but being Mayor carries a historical legacy that goes right back to the 14th century.
When the Normans invaded and subsequently rolled out town governance, Mayor was an enormously powerful job in local politics. The mayor called the shots. He (and it always was a man until the 1970’s) raised taxes, militias, passed sentence, performed weddings, decided what was spent and was enormously influential.
Happily the stocks are long gone from Wexford and I cannot see the circumstances when a militia might be needed for the moment! The town sergeant precedes the Mayor at formal events bearing one of the towns 3 silver maces. They date from the 18th century and we know that because on the staff there’s a harp representing Ireland, the rose representing England and the thistle to represent Scotland. All 3 kingdoms mentioned but nothing about our nearest neighbour, the Principality of Wales!

The traditional open meeting to elect the Mayor took place in Wexford Arts Centre, the original home of Wexford Corporation. I always enjoy these meetings as a councillor because there is something hugely significant and important in electing a Mayor. Being Mayor in Wexford is a completely different proposition to being Mayor in a bigger urban area. You’re so much more accessible and recognised. You’re ex-officio a member of all committees in both the town and the district. Add to that my membership of the VEC and it makes for a busy year in terms of policy development as well.
Not to mention there’s the social side to it or as it’s been described “Eating for Wexford”! When I served as Deputy Mayor 3 years ago I got to see that side of the town’s social life. I’ve always tended to think differently of invites to social events to those who actually organise them. You’re there because of who you represent. The others can do R & R but the Mayor can’t. 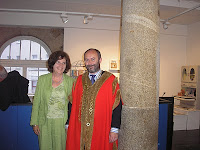 But there is something hugely important in being Mayor, local authorities are often derided but without them who would step into the gap? Moreover a Labour Mayor has always a vision of so what is mine? Hanging on the wall of the Arts Centre last night was a poster that said “I see the world as it is”. How appropriate! I pointed out that if you come to terms with the past you understand the present mistakes and you can plan your future. We all have a future in this town however it is one within the context of social solidarity. We cannot make those who are worse off pay for mistakes of the past. If we are to have a future it is on the basis that we all opt in. We must talk up our town, Why is it that decentralisation to Wexford worked? We have a lot going for us here, It’s time to tell the world about Wexford.
Posted by Unknown at 7:48 AM