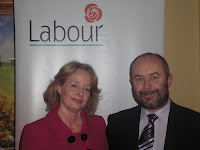 Last night Labour candidates gathered from around the county in the Ashdown Park Hotel in Gorey to launch both the local election campaign for Cllr Bobby Ireton and Joy Rice and the Wexford leg of the European campaign for Labour’s candidate in Ireland East Nessa Childers. The decision to require an immediate by-election for any Dail or Seanád member elected to Europe has significantly changed the race for the two big conservative parties. Heretofore a senior Oireacthas member generally a backbencher or former Junior Minister was wheeled out around a few counties to round up the party faithful and make sure the local vote transferred to their party running mate and hey presto Brussels here we come! 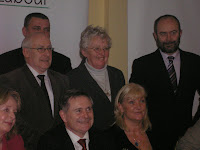 Things have moved on as the seats have been re-distributed to other countries but something tells me that the penny hasn’t dropped with FF or FG. Tickets are slow in being put together and campaigns are still on the drawing boards while de Rossa, Kelly and Nessa Childers are out knocking doors, shaking hands but most of all listening to how communities are dealing with the ongoing slump and explaining how a European dimension may provide some economic stability in the present chaos.

Nessa Childers is running a very strong campaign in Leinster. I met her last night and what struck me most about her is that she is an excellent listener. She said herself in relation to her family background in politics “if you know want to know where you’re going you must know where you’ve come from”. She has a constituency that stretches from the Shannon to the Irish Sea and from Hook Head to Carlingford Lough. A lot of different communities with a lot of different issues, if there’s anyone who can listen and articulate these needs in Brussels, I’m convinced its Nessa. She has identified the need for developing a new economy based on new technologies as the basis to re-boot our economy, she’s been to Brussels to put these ideas to the EU Parliament Vice President Rasmussen already. Meanwhile back home the two FF & FG still treat this election like a cross between a beauty contest and You’re a Star!

Joy and Bobby are a formidable team. They both appeal to different constituencies and I believe they make a good team. They compliment each other and I can see them both getting elected and as Bobby says holding the balance of power on Gorey Town Council. Gorey district gains a seat this time round and Fianna Fail will be under enormous pressure to hold their 2 seats. If the election was held today I don’t think they’d do it. Bobby is one of Wexford politics’ gentlemen; his day is on its way. I think that the big story of these local elections in Co Wexford will be Bobby Ireton. Don’t forget who told you that first!
Posted by Unknown at 12:52 AM