Bill Murray would understand Brian Lenihan. Condemned to repeat his actions until he gets it right in the movie “Groundhog Day”, Brian Lenihan may well be looking for Bill’s number for advice ahead of the Holy Week budget. The 2009 Groundhog Day at Gobblers Knob coincided with the anooucement by Brian Cowen of readjustments designed to keep the public finances in track. My way!

It was the way that the supplementary budget was announced which gave away the game that Fianna Fail& the Greens had run out of ideas. When asked about the ever-declining revenue base by Eamon Gilmore, Brian Cowen said the matter would be addressed in a Finance Bill No 2. As the Finance Bill No 1 referring to the October budget has been passed, No 2 refers to the next budget i.e a supplementary budget. Previously the minister had said he’d wait for the commission on taxation to report on revenue generation before he’d bring in proposals on tax in Autumn. That line is no longer sustainable. 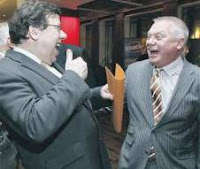 So here we go again; the Fianna Fail and Green grounhogs are having another go at getting things right. It’s easy to forget how many goes they’ve had at stabilising the economy so is there any real harm in giving them another one? Competent governments only need one go so let’s recap;

First Go; July 2008 cuts of €400M are announced and the government goes on holiday for 10 weeks! Second Chance; Early 2009 budget in October to let the people know whose in charge, no one told the cabinet however, Third time; Government announces in early December a strategy for focussing investment in infrastructure, Dail recess for 6 weeks and this doesn’t work so a fourth attempt on the return sees the Taoiseach announce a series of new measures including the pension levy for public servants in February. Now in March we’re told they’ll have a fifth go in April. But last week the Tainiste told us that the public finances were under control.
So now the government will sit around the cabinet table once more and try to come up with another way of solving the crisis. It’ll give them a chance to fly kites in the media once more, perhaps we’ll hear about cutting back Minister for State, social welfare for single mothers, child benefit, increasing tax rates and bringing those on low pay into the net while ignoring the money etc. Mind you Fianna Fail & the Greens have sat on these figures for months now, they gave the Labour Party access to the figures at breakfast time today and by bedtime they expect them to have the answers!

So what the alternative? Lets assess the facts; The top 1% own 34% of the wealth of the country. The disposable income of the top 10% is 14 times greater than that of the bottom 10%. Well first if there is a national emergency where are our wealthy? Let’s get them back home from their tax havens and start them contributing. Close off the tax schemes that allow money to be stashed away in concrete. Freeze public service pay, freeze the numbers working in the public service, scrap the co-location programme, reduce the national development plan, end decentralisation after the present phase is over, personally I’d charge through the nose for cigarettes and alcohol and make rates payable to the local authority.
Like the groundhog this government seems afraid of a shadow. What will they do in Summer when they get the report from the commission on taxation? By then they’ll have taken the easy option. Perhaps Brian Lenihan may not ring Bill Murray but he should listen to someone because in the last budget he didn’t and look what happened!
Posted by Unknown at 12:01 AM