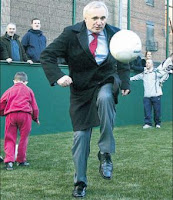 It could only happen to the Irish! A bankrupt nation with amoral political leaders lecturing to the world about fair play. A full year on from Seanie Fitz’s sleight of hand, the ire of Eire is diverted away from those who ripped us off to Thierry Henry an overpaid diver who pulled a fast one.
OK I’m sorry that Ireland won’t be at the World Cup. I believe that it would have been the fitting last hurrah for many of our players. Surely it should be left to sports people to deal with it. There won’t be a replay, the French World Cup kit is for launch next week with the lucrative Christmas market on the horizon and with the pressures of premiership and champions league, there won’t be time for a re-match. The only re-match I want to see is the FF versus the people at a polling station. For some strange reason FF and their acolytes aren’t too anxious on that one.. 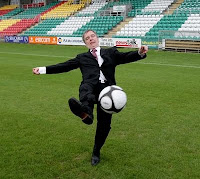 Of course that didn’t stop Brain Cowen, Martin Cullen and Dermot Ahern calling for a re-run and sounding righteous about injustice. Of course their concern at injustice doesn’t extend to their own citizens who will face cuts in income, increased charges and lower standards of living while the banks sell Cowen, the newly discovered soccer pundit, a dummy on pay for top execs. The sight of Sarkozy embrace the triumphant Dominech in the tunnel after the match had all the spontaneity of Christmas Day, performed for the benefit of the cameras. Of course Sarkozy makes the fundamental mistake of mistaking the mood of the people. More than 88% of French people believe that Ireland should have gone through. Could a higher figure been recorded in Ireland? I doubt it!

Likewise Cowen misjudges the mood of the people. I strongly suspect he is attempting to seek the high moral ground to increase his standing in the face of the electorate. This will backfire too. By the week-end the premiership will be back on and fans will have more soccer to watch. If FF temporarily climb in the tracker poll that will be carried out this week, then the international incident around the match will have served FF and the Greens well. The suits in AIB likewise will smile that these events have taken them off the front of the pages. But in the long run Cowen should know that he’s finished despite all his platitudes. That’s why his spin on fair play won’t work.
Patriotism and nationalism is the last retreat for the scoundrel. When the budget is announced Ireland’s world cup exit will be a memory. Thierry Henry may be a cheat, but he didn’t undermine the banks, the economy nor set the public service against the private sector. The real cheats are Cowen, McCreevy, Ahern, Harney, Gormley and Lenihan. The real culprits need to take the rap!
Posted by Unknown at 11:33 PM

I like football and was sickend that Ireland lost in such a way, but still, IT IS ONLY A GAME! GET OVER IT EVERYBODY.
Like you said it's given FF a big diversion and a chance to show how much they care.
The new opium for the masses.