Lose your money but don’t lose your business. 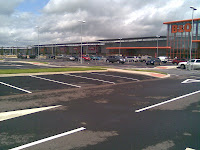 Ben Dunne is a hard nose businessman. He know how to make money when times are good and even more he know how to make money when times are bad. In the last few weeks his various ads have hogged the airwaves and he’s been interviewed about the slump in the retail sector. He laughs at the suggestion that the consumers shouldn’t go north to get better value. What drives trade is the customer and competition. I wonder what he’d make of the call by a Wexford town businessman and councillor that Wexford people shouldn’t go shopping in Waterford to avail of reduced parking charges?

Ben sums up his credo as; lose your money but don’t lose your business! He criticises Irish business for failing to pass on the benefit of a strong euro to customers. A Forfas survey last year suggested that the real difference between prices north and south should be just 5%. Yet there’s plenty empirical evidence to suggest that the prices have not dropped as fast or as far as they should. Many people will ignore the advice of the good councillor and shop in Waterford, not because they’ll save much on parking but because they want competition and better prices.

Many people buy electrical items in the run in to Christmas so lets take as an example the price of electrical items. At a time of falling incomes retailers of small household electrical appliances actually jacked up prices in September 2009 by 0.4%! To underline the reality on how little some prices have moved, the cost of electrical repairs on household items like computers has only dropped so far this year by 0.8%, but the CSO kindly give the figures for the drop in price in items such as computers. They’ve fallen by 25% in a year. So where’s the incentive to have something repaired if the price to have something fixed remains high while the cost of replacement is dropping? Moreover where is the value and are there 2 economies in this country, the official one and another for the media?

Its time that those in business woke up and smelt the coffee and stopped whinging about how miserable their trade is. This sector constantly preach to the community about adapt or die. Has the time not come for them to practise what they preach? For the record the above picture is of a car park at a business park in Waterford last August. There’s no charge for parking and yet the car park is empty. The other picture was taken in ASDA in Enniskillen the same week-end. Ben Dunne laughs at his family’s logo; The difference is we’re Irish, and suggests “The difference is we’re cheaper” would be better. 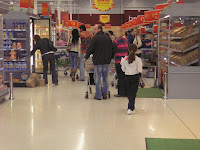 Southern customers have no problem spending their hard earned and increasingly scarce euro when offered value. Why should many have to cross the border to get that value? Sense in the sectors identified above would surely keep some of the money at home. It's time for the councillor concerned to stop grandstanding and see what he can do about delivering better value to Wexford's customers! There's an old adage about business that the customer is always right. Perhaps some in the retail trade may reflect on this in the run in to Christmas and give customers a better deal.
To compare prices between British multiples with outlets in the north check out www.mysupermarket.co.uk
Posted by Unknown at 9:13 PM

I have been talking to local business people about parking charges in town. They all seem to agree that if free parking was available it would be good for business.

Small traders are a at disadvantage already trying to compete with Dunnes, Tesco, Lidl and Aldi, but when these big chains can provide free parking and the small traders can't, it puts them at an even greater disadvantage.

Parking charges make a significant contribution to WBC revenues. This money is used by the council to pay council workers and provide services in the town. I accept that trading conditions are difficult but the real problem for the local authority is that if the income from parking is less how do we make up the revenue forgone? Do we up rates or increase local authority rents? I'm consious of how many local authority tenants are in receipt of unemployment benefit and rely on social welfare which will be cut in 3 weeks time in the budget.
I don't accept it as a personal priority to look after the iterst of business people at the expense of the less well off. Only a fool would pretend that you can reduce every charge and yet maintain services. Something has to give, and I'll protect the itnerests of those on social welfare as best I can.

Fair play Joe,
obviously those on Social Welfare come first. But I remember a few years back the Council had a free parking day to promote business in town.
Maybe one before Christmas would be a good idea to attract people to do their christmas shopping in Wexford.